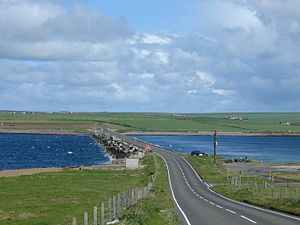 The Churchill Barriers are a series of four causeways amongst the Orkney Islands, constructed during the Second World War and linking the south-eastern islands of the group. They have a total length of 1½ miles.

The barriers link Orkney Mainland in the north to the island of South Ronaldsay in the south by way of Burray and the two smaller islands of Lamb Holm and Glimps Holm.

The barriers were built in the 1940s primarily as naval defences to protect the anchorage at Scapa Flow, but now serve as road links, carrying the A961 road from Kirkwall to Burwick. 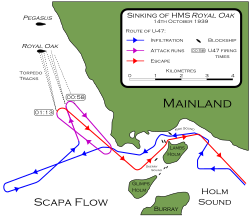 On 14 October 1939, the Royal Navy battleship HMS Royal Oak was sunk at her moorings within the natural harbour of Scapa Flow in a nighttime attack by the German U-boat U-47 under the command of Günther Prien. Shortly before midnight on the 13 October the U-47 had entered Scapa Flow through Kirk Sound between Lamb Holm and the Mainland. Although the shallow eastern passages had been secured with measures including sunken block ships, booms and anti-submarine nets, Prien was able to navigate the U-47 around the obstructions at high tide. He then launched a surprise torpedo attack on the unsuspecting Royal Navy battleship while it was at anchor in Scapa Flow. The U-47 then escaped seaward using the same channel by navigating between the block ships.

In response Winston Churchill, then First Lord of the Admiralty, ordered the construction of several permanent barriers to prevent any further attacks. Work began in May 1940 and was completed by September 1944. However the barriers were not officially opened until 12 May 1945, four days after the end of the war in Europe.

The contract for building the barriers was awarded to Balfour Beatty, although part of the southernmost barrier (between Burray and South Ronaldsay) was sub-contracted to William Tawse & Co. The first Resident Superintending Civil Engineer was E K Adamson, succeeded in 1942 by G Gordon Nicol.

Preparatory work on the site began in May 1940, while experiments on models for the design were undertaken at Whitworth Engineering Laboratories at the University of Manchester.

The bases of the barriers were built from gabions enclosing 250,000 tons of broken rock, from quarries on Orkney. The gabions were dropped into place from overhead cableways into waters up to 59 feet deep. The bases were then covered with 66,000 locally cast concrete blocks in five-ton and ten-ton sizes. The five-ton blocks were laid on the core, and the ten-tonne blocks were arranged on the sides in a random pattern to act as wave-breaks.

A project of this size required a substantial labour force, which peaked in 1943 at over 2,000.

Much of the labour was provided by over 1300 Italian prisoners of war who had been captured in the desert war in North Africa, and were transported to Orkney from early 1942 onwards. As the use of POW labour for War Effort works is prohibited under the Geneva Conventions, the works were justified as 'improvements to communications' to the southern Orkney Islands

The prisoners were accommodated in three camps, 600 at Camp 60 on Little Holm and the remaining 700 at two camps on Burray. Those at Camp 60 built the ornate Italian Chapel on Lamb Holm which still survives and has become a tourist attraction.