Charleville is a town in the north of County Cork, within the East Riding. It lies in the Golden Vale, on a tributary of the River Maigue, near the border with County Limerick. Charleville is on the N20 road and is the second-largest town between Limerick and Cork (Mallow is the largest). The Roman Catholic parish of Charleville is within the Diocese of Cloyne. Significant industries in the town include Kerry Co-Op and the construction and services sectors.

The old name for the place was Rathcogan, later Rathgogan or Rathgoggan,[2][3] the last (Irish: Ráth an Ghogánaigh) still the name of the civil parish around the town.[4] The name means Cogan's rath (ringfort), after the family of Miles de Cogan, granted lands there after the 12th-century Norman invasion.[2][3] The new town begun by Roger Boyle, 1st Earl of Orrery in 1661 was named Charleville after Charles II, who had been restored to the throne the previous year. Later Irish speakers referred to the town as An Ráth "the rath", a short form of the older Irish name.[3] The name Irish: Ráth Luirc ["Lorc's rath"] was first attached to Charleville in an 1849 collection of 18th-century Irish-language poems with English translations.[n 1] The translation of an aisling by Conchúbhar Máistir Ó Ríordáin interpreted Irish: 'Ráth Loirc' as denoting the town of Charleville. T. F. O'Rahilly felt that Irish: 'Ráth Loirc' , like the more common Irish: 'Clár Loirc', was a poetic name for Ireland.[2] D. A. Binchy felt the term, also used by Aogán Ó Rathaille, did refer to a specific place, but likely somewhere in Muskerry, not Charleville.[2][3][5][6] After the 1920 local elections, Sinn Féin-dominated councils loyal to the self-proclaimed Irish Republic often sought to replace placenames having British monarchic allusions with older Gaelic names. Although Rathgoggan was mooted by Charleville Rural District Council, Risteárd Ó Foghladha ["Fiachra Eilgeach"] advised that Ráth Luirc was the old name, and it was changed to Rathluirc in 1920.[2][3][7] Ó Foghladh claimed Lorc was an ancient king of Munster;[8] in fact Lóegaire Lorc was a mythical High King of Ireland.[2] The Placenames Commission was established in the 1940s to systematically determine the authentic Irish names of places, and based on its advice that An Ráth was the commonly-used name among the last generations of local Irish-speaker, this was legally made the Irish name in 1975.[9] Thus the town had the anomalous position that its English-language legal name was an Irish name different from its Irish-language legal name. The name "Charleville" remained in common use.[7] In December 1989, a plebiscite of residents under the Local Government Act 1946 voted on four names: of 2200 electors, 1500 voted, over 90% for Charleville.[10][11][12] Official documents before and after 1989 have often used "Rathluirc (Charleville)" or similar formulations. Local sports teams have a rath or fort in their crest, reflecting the Irish name.

Charleville was founded in 1661 by Roger Boyle, 1st Earl of Orrery. Roger Boyle had been a supporter of Oliver Cromwell in the English Civil War. When King Charles II was restored in 1660, he had to prove his loyalty to the crown. He did this by naming Charleville after the king. The villages of Brohill and Rathgoggin, who in their former guise preceded the formation of the town of Charleville in the area, fell under the rule of the following political entities: the Eoghanachta of southern Munster, at some point by the Hiberno-Norman Lordships of Ireland 1169–1541 although this rule was nominal rather than actual and subsequently by the Kingdom of Desmond 1118 – 1596. The lands of Broghill and Rathgogan were purchased by Roger's father Richard Boyle as a part of the Plantation of Munster and Roger subsequently established his residency there after the founding of Charleville. 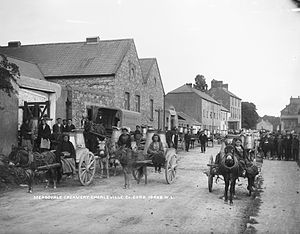 During the time of the Penal Laws, practising the Catholic faith was illegal. As a result, the parish of Charleville was amalgamated with the parishes of Bruree and Colmanswell, both in the Diocese of Limerick. In 1704, Fr. Daniel Mac Namara of Bruree was registered as the Catholic priest for this very large pastoral area.[13] The fact that Catholics had to attend Mass secretly meant that the old chapel in Holy Cross cemetery was abandoned. The remains of this church – now overgrown with ivy – are still to be seen in the centre of the graveyard. Indeed, like so many other pre-1700 churches, the old church of Holy Cross literally became part of the surrounding graveyard, in that several gravestones, both marked and unmarked, are to be found within the building itself. Upon one such gravestone is a Latin epithaph to none other than Seán Clárach Mac Domhnaill (1691–1754), who was, in his time, the Chief Poet of Munster, as well as a native of Charleville.

Charleville is geographically located at 'the heart of Munster', within the Golden Vale region. It is 37 miles from Cork city to the south and 25 miles from Limerick city to the north.

Charleville is a centre for the food processing industry, with brands such as Charleville Cheese and Golden Vale produced by Kerry Co-Op.

Numerous spin-offs both in the town of Charleville and the surrounding area were created when Golden Vale Engineering closed its doors in 1983. The largest amongst these were BCD Engineering, Diamond Engineering and Sapphire Engineering. BCD is the second largest employer in Charleville.

Golden Vale (part of the Kerry Group) continue to make cheese products in the town. Golden Vale is the largest employer in Charleville.

Charleville has numerous pubs as well as two theatre facilities and is home to the North Cork Drama Festival which is held in the Parochial Hall. The second facility is the Schoolyard Theatre which is home to the Shoestring Theatre group.

Charleville railway station is on the Dublin–Cork railway line. It opened in 1849 on the Great Southern and Western Railway. The former Cork–Limerick line branched off the Cork–Dublin line at Charleville, continuing via Croom; the final goods train ran in 1976, since when Limerick Junction, already the junction for Dublin–Limerick, has also been the junction for Cork–Limerick.[17]