Charlestown is a town in County Mayo, contiguous with Bellaghy, County Sligo, at the crossroads of the N17 and N5.

Charlestown was built in the mid-19th century on the initiative of Viscount Dillon's agent, Charles Strickland, adjoining Bellaghy in County Sligo.[2] Including Bellaghy, the town has a population of approximately 900.[1]

The village was the subject of a serialised social commentary in The Irish Times by John Healy. This was later published as Death Of An Irish Town, and later republished as No One Shouted Stop! Written in 1967, it was highly critical of government policies towards rural areas, and took Charlestown as an example solely because it was the town of the author's birth. 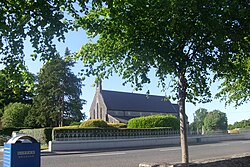 Gaelic Football team Charlestown Sarsfields reached the All-Ireland club semi-final in 2001, losing out on a final spot by two points.

In 2012 the town's sporting offering was complemented with the formation of Charlestown Boxing Club. In a relatively short time, the club has successfully acquired numerous county and provincial titles, 1 National championship title and 3 Runner's-Up. Its boxers have also been selected to represent Co. Mayo in inter-county competition.

Trains ran through Charlestown from 1895 to 1963. The village had a station on the GS&W line from Claremorris to Collooney, part of the Western Railway Corridor. Charlestown station opened on 1 October 1895, closed for passenger traffic on 17 June 1963, and finally closed altogether on 3 November 1975.[3]

Charlestown was the home town of Irish Times and Western People journalist John Healy who wrote a series of articles about the town which were later turned into a book, No One Shouted Stop. The owner of the Freeman's Journal, Irish Senator Martin FitzGerald, was born on Main Street, Charlestown.[4] Michael O'Doherty, Archbishop of Manila, was born in Charlestown, and it was also the home town of Margaret Sweeney, grandmother of Noel and Liam Gallagher of Oasis.[5]