Cavers Carre is a house in the parish of Bowden in Roxburghshire. It stands alone in its lands to the north of the Ale Water. Bowden itself is two and a half miles to the north, and a couple of miles to the west and south-west are the little villages of Midlem and Lillesleaf.

There was an older house here, believed to have been a fortified house. This was partly demolished about 1775 to make way for a successor, though stones from the old house are incorporated in the new. It about 1800, this new house in its turn was extended and remodelled.

The present mansion comprises a square main block of two storeys, with sunken cellars beneath, and which looks out on a kitchen court bounded by lower buildings, which appear to be the earliest of the current house. The house has a centre doorway and interesting 'marriage stones' (memorials of successive owners' marriages) have been inserted over each ground floor window.[1]

The house was later restored. It has no outstanding architectural features.

A dovecot stands in the grounds north-east of the house, with a date-stone (since moved) inscribed '1532' built into the SE face.[2] 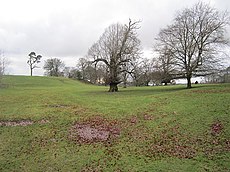