Carn Brea is a hill above Redruth and Camborne in Cornwall, and also the name of a civil parish of 8,000 souls. The summit is crowned with the remains of a Stone Age settlement.

The earliest Neolithic settlement at Carn Brea was a tor enclosure occupied between around 3700 and 3400 BC. A two-acre inner enclosure was surrounded by one of eleven acres. The ramparts consisted of stone walls with an earth bank and ditch. Traces of fourteen platforms on which would have stood Neolithic long houses have been found by archaeologists within its ramparts, along with pottery and flint artefacts.[1]

The site was excavated between 1970[2] and 1973[1] by Roger Mercer. A population of 100 to 150 has been suggested. There is evidence that the occupants cleared the surrounding land for farming by burning away the undergrowth and removing stones. The acid soil obliterated any environmental evidence about this. Nearby outcrops of rock suitable for manufacture as axes would have contributed to the village's economy. Edge grinding stones, blanks and incomplete and finished axes found on the site indicate that the inhabitants were accomplished stoneworkers and traded their products with others. The pottery found on the site appears to have been made from gabbroic clay originating from nearly 20 miles to the south in the present day parish of St Keverne. This further suggests a complex economic network in the area.[3]

The 700 flint arrowheads found scattered at the site suggest that Carn Brea may have been attacked at least once.[1] Every timber structure on the site had been burnt, and charcoal was the only organic matter that survived the acid soils. The earthworks themselves may also have been deliberately damaged by an invader.

In the Iron Age the site was reoccupied and minerals were mined from the hillside. A hoard of Kentish gold staters found in the 18th century suggests trade links with the other side of the country at this time. 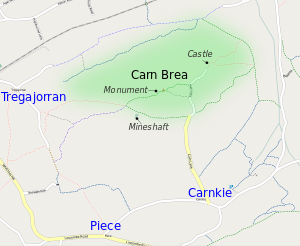 The mediæval Carn Brea Castle stands near the top of the hill. This was originally built in 1379 as a chapel, probably dedicated to St Michael,[4] before being rebuilt in the 18th century by the Basset family as a hunting lodge.[5] It is considered a Folly castle, due to the huge uncut boulders that make up part of its foundations, giving the impression of the building melting into the land.[6]

An East India trading ship was named after Carn Brea Castle, wrecked off the Isle of Wight in 1829 and involved in excise tax fraud.[7]

In the 1980s the abandoned building was converted into a Middle Eastern cuisine restaurant.[8]

At the highest point of the hill there is a 90-foot high Celtic cross. This is a monument to Francis Basset, 1st Baron de Dunstanville and Basset (1757–1835). Basset, a mine owner, gained his titles for erecting earthworks to defend Plymouth from combined French and Spanish fleets in 1779, and suppressing a miners' "food riot" in 1785.[9] Along with others, he petitioned the House of Lords against slavery in 1828.[10] The monument was erected by public subscription in 1836. It is inscribed "The County of Cornwall to the memory of Francis Lord de Dunstanville and Basset A.D. 1836."[11] (50°13’16"N, 5°14’56"W) 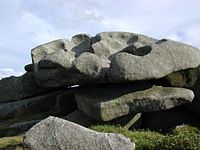 The Cup and Saucer Rock is a large flat rock perched next to the Monument showing several deep basins. This rock has also been called "The Sacrificing Rock" (though with doubtful historical accuracy).[12] (50°13’16"N, 5°14’54"W) 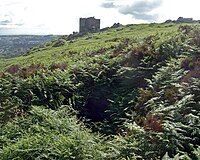 In a depression between the Monument and the Castle are the remains of the "Smugglers' Cave", blocked by the Council in the 1980s with rocks to stop children entering. This tunnel is rumoured to extend from the top of the Carn down into Redruth town, but it is probably an abandoned mine working. It may have been confused with another tunnel from the castle down to St Uny's church which was blocked off for safety reasons around 1970 by the castle owners. (50°13’19"N, 5°14’50"W)

This well can be found at the foot of Carn Brea below the Castle and near St Euny's Church. It has a plaque by Carn Brea Parish Trails reading "St Euny Well. Holy well of St Euny visited by the Celtic Missionary 500AD". Stories about the sacred use of this well may be confused with St Euny's Well at Sancreed.

At Easter Redruth Baptist Church erects a lit cross on the outcrop behind the Castle overlooking Redruth. For many years a Christian sunrise service has been held on Easter Sunday.

The Midsummer Eve (St John's Eve, 23 June) bonfire ceremony is held. Prayers are read in Cornish and the bonfire is lit, signalling other fires to be lit at Sennen, Sancreed Beacon, Carn Galver to the Tamar. When only the embers remain, young people leap across them to drive away evil and bring luck.[13]

The Boxing Day meet of the Four Burrow Hunt starts at the top of Carn Brea.[14][15]