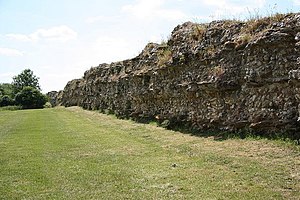 The wall of Calleva 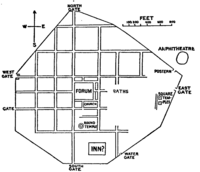 Calleva formally known in full as Calleva Atrebatum ("Calleva of the Atrebates"), was a major Roman town and before that an Iron Age oppidum. In Roman Britannia, Calleva was the civitas capital of the Atrebates tribe. Its impressive ruins are now known as Silchester Roman Town.

The name 'Calleva' is from the ancient British language and is thought to derived from the words meaning "Great Wall", reconstructed in early Welsh as gwall fawr, which may refer to the original Iron Age oppidium.

Calleva is found at Silchester in northern Hampshire, five miles north of Basingstoke, and close to the bounds of Berkshire. The main site of the town is well defined by the large wall surrounding it. Within the wall stands the Parish Church of St Mary the Virgin, and all this is about a mile to the east of the modern village of Silchester.

Evidence for the presence of a Late Iron Age oppidum (an embanked, defensive enclosure) at Silchester is derived from the evidence of coins found within the site and archaeological excavations over the 20th century. Coins of the British Q series link Silchester with the seat of power of the Atrebates, and coins stamped with COMMIOS have been used to associate Calleva with the historical figure Commius, who is thought to have fled to Britain from Gaul.[1][2] The Late Iron Age oppidum was on the edge of a gravel plateau, underlying the subsequent Roman town. The Inner Earthwork, constructed c. 1 AD, enclosed an area of 79 acres, and a more extensive series of earthworks were present in the wider area.

Small areas of Late Iron Age occupation have been uncovered on the south side of the Inner Earthwork [3] and around the South Gate.[4] More detailed evidence for Late Iron Age occupation was excavated below the Forum-Basilica. Several roundhouses, wells and pits were present on a north-east - south-west alignment, dated to c. 25 BC - 15 BC. Subsequent occupation, dated to c. 15 BC - AD 40/50, consisted of metalled streets, rubbish pits and palisaded enclosures. Imported Gallo-Belgic finewares, amphorae and iron and copper-alloy brooches show that the settlement was high status. Also distinctive evidence for food was identified, including oyster shell, a large briquetage assemblage and sherds from amphorae which would have contained olive oil, fish sauce and wine.[5] Further areas of Late Iron Age occupation have been uncovered by the Insula IX 'Town Life' Project. Excavation of the Late Iron Age phases have provided evidence for a substantial boundary ditch c. 40 - 20 BC, a large rectangular hall c. 25 BC - AD 10 and the laying out of lanes and new property divisions c. AD 10 - 40/50.[6] 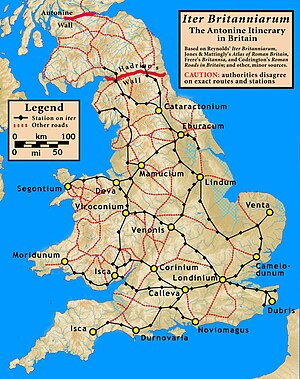 A map of Roman roads, with Calleva at crossroads town

After the Roman conquest of Britain in 43 AD the settlement developed into the Roman town of Calleva Atrebatum. It was slightly larger, about 99 acres, and was laid out along a distinctive street grid pattern.

The town contained a number of public buildings and flourished until the early Anglo-Saxon period. A large mansio was situated in Insula VIII, near the South Gate, consisting of three wings arranged around a courtyard.[7]

Calleva was a major crossroads of Roman roads. The Port Way led west to Sorviodunum (Old Sarum in Wiltshire) as part of the route between Londinium (London, in Middlesex) and Durnovaria (Dorchester, in Dorset). 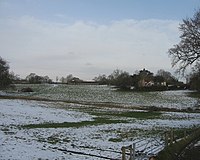 Calleva in the snow

Silchester was finally abandoned in the 5th to 7th century, which is unusually late compared to other deserted Roman settlements.[8] Ford identifies the site with the Cair Celemion of Nennius's list of the 28 cities of Sub-Roman Britain.[9] Most Roman towns in Britannia continued to exist after the end of the Roman era, and consequently their remains underlay their more recent successors, which are often still major population centres. There is a suggestion[10] that the Saxons deliberately avoided Calleva after it was abandoned, preferring to maintain their existing centres at Winchester and Dorchester. There was a gap of perhaps a century before the twin Saxon towns of Basing and Reading were founded on rivers either side of Calleva. As a consequence, Calleva has been subject to relatively benign neglect for most of the last two millennia.[11] 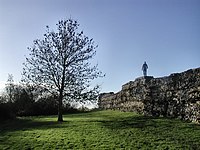 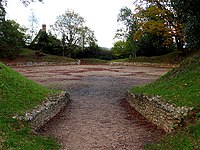 The earthworks and, for much of the circumference, the ruined walls are still visible. The remains of the amphitheatre, added about AD 70-80 and situated outside the city walls, can also be clearly seen. The area inside the walls is now largely farmland with no visible distinguishing features, other than the enclosing earthworks and walls, with a tiny mediæval church in one corner.[12][13] There is a spring that emanates from inside the walls, in the vicinity of the original baths, and which flows south-eastwards where it joins Silchester Brook. 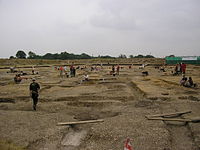 Calleva was partially excavated by the Society of Antiquaries of London between 1890 and 1909, and this excavation provided valuable information about civic life and daily life in the first centuries AD, as well as a map of the town. Whilst the excavation techniques of the time were adequate to deal with buildings with stone foundations, work in other towns of Roman Britain has revealed that timber construction predominated in the 1st and 2nd centuries AD, and the early excavations were not capable of recovering evidence of these buildings.[14] This excavation was believed to have destroyed evidence that might have been analysed with current technology and practices. As archaeological study of this kind can be a destructive process, the excavation of Calleva is frequently mentioned as an example of why complete excavation should not be performed.[15]

Molly Cotton carried out excavations on the defences from 1938-39.[16] Since the 1970s the University of Reading has undertaken several excavations on the town walls (1974–80),[17] amphitheatre (1979–85) [18] and the forum basilica (1977, 1980–86),[19] which has revealed remarkably good preservation of items from both the Iron Age and early Roman occupations. From 1997 to 2014 [20] the 'Town Life' project has undertaken excavation of the north-eastern area of Insula IX. Results of the Late Roman [21] and Mid Roman phases have been published.[22] Results indicated that the scope for further work inside and outside the walls is enormous.[14]

A wingless Roman eagle discovered in excavations at the basilica in 1866 was part of the inspiration for Rosemary Sutcliff's The Eagle of the Ninth. The Museum of Reading, which houses the Silchester eagle, states that it "is not a legionary eagle but has been immortalized as such by Rosemary Sutcliff."[23] It may originally have formed part of a Jupiter statue in the forum of the Roman town. 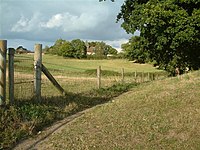 The parish church within the walls

Now primarily owned by Hampshire council and managed by English Heritage, the site of Calleva is open to the public during daylight hours, seven days a week and without charge. The full circumference of the walls is accessible, as is the amphitheatre. The interior is farmed and, with the exception of the church and a single track that bisects the interior, inaccessible. Current excavations are sometimes open for visitors, and occasional organised open days are held.

The Museum of Reading in Reading Town Hall has a gallery devoted to Calleva, displaying many archaeological finds from the various excavations.