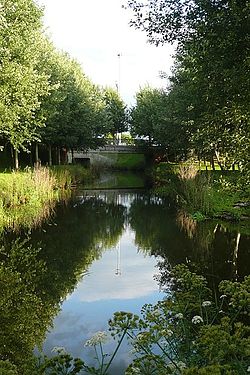 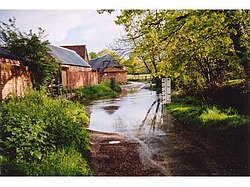 The Brook forded at Clapper's Farm, near Silchester 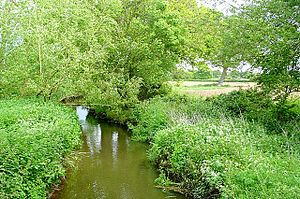 The Brook from Missels Bridge, near Beech Hill

Foudry Brook is a small stream in southern England. It rises near the Hampshire village of Baughurst where it is named as Beaumont's Stream or Beaumont's Brook.

From Baughurst the brook flows eastwards though Tadley and the Pamber Forest nature reserve; thereafter it turns northeastwards, skirting below and around Calleva Atrebatum: the Roman town at Silchester, and its name changes to the Silchester Brook.

Once in Berkshire the river adopts its final name of Foudry Brook before flowing through Mortimer and onward towards Swallowfield, here it is prevented by slightly higher ground from joining the River Loddon, so instead it turns North towards the town of Reading.

After passing under the M4 motorway, the stream passes through the Green Park Business Park, near Whitley, where it provides the water for the landscaped lakes. It passes north, alongside the A33 dual carriageway, before entering the Kennet and Avon Canal as its easternmost main tributary just after Canal Bridge Bridge No8A, and near the Brunel Retail Park.

Chalk]] is the major aquifer in the Berkshire area. In the areas underlying Foudry Brook an overlying layer of clay and sand confines the chalk[1]

Foudry Brook has the typical characteristic of clay catchment rivers. It has a very variable flow rates, a low base flow component and a ‘flashy’ nature; it responds quickly to extreme rainfall events due to the impermeable nature of the clay over which it flows and the resulting high surface water runoff.[1]

Foudry Brook has a grade of ‘c’ to ‘d’ on the Environment Agency General Quality Assessment (GQA) scheme for biological and chemical quality (with ‘a’ being the highest quality and grade ‘f’ the lowest). This is possibly as a result of treated effluent being discharged into the lower reaches.[1]

The brook is prone to flooding along its length, and this has caused the most problems on the outskirts of Whitley; however, the presence of water voles along this stretch of the Brook has hampered efforts to provide improved flood prevention measures.[2]

In a prosecution brought by the Environment Agency in 2002, Total Fina Elf UK Ltd was fined a total of £54,000 for causing petrol to enter groundwater and a tributary of the Foudry Brook, from its service station in Tadley, Hampshire. Between January 1999 and March 2001 the petrol station lost between 2,000 and 10,000 litres of fuel into the ground[3] following leaks in an underground petrol tank, and filler and suction lines.[4]

In July 2010 a serious leak from sewage works into the Brook near Silchester[5][6] caused the death of hundreds of fish and other aquatic organisms on a three-mile stretch of the brook.