Butetown is an urban village in the south of the City of Cardiff in Glamorgan. It was originally a model housing estate built in the early nineteenth century by John Crichton-Stuart, 2nd Marquess of Bute, for whose title the new village was named, in order to house workers in Cardiff Docks.

Commonly known as "Tiger Bay", this area became one of the UK's first multicultural communities with people from over 50 countries settled here by the outbreak of First World War, working in the docks and allied industries. Some of the largest communities included the Somalis, Yemenis and Greeks, whose influence still lives on today. A Greek Orthodox church still stands at the top of Bute Street. It is known as one of the "five towns of Cardiff", the others being Crockhertown, Grangetown, Newtown and Temperance Town. 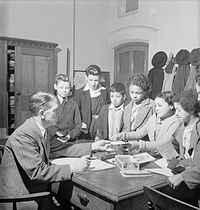 In the 1960s, most of the original housing was demolished including the historic Loudoun Square, the original heart of Butetown. In its place was a typical 1960s housing estate of low-rise courts and alleys, and two high rise apartment blocks.

In the 1980s, the new Atlantic Wharf development was built on the reclaimed West Bute Dock, and has involved the construction of some 1300 new houses. Together with the developments in the Inner Habour and Roath Basin, it was hoped this would spur redevelopment and employment in Butetown, but it seems not to have. The divide between the wealthy Cardiff Bay, and the poor Tiger Bay seems as wide as ever, although some of the surviving areas of historic Butetown are becoming prime office and retail locations. With the new Century Wharf development to the west on the banks of the Taff, the housing estate is becoming a little 'boxed in', increasing feelings of exclusion. Over the next few decades, the 1960s housing will require renewal and it is hoped that new development will be more suitable of the urban context of the area and will provide a better mix of private and public housing to help fully integrate the community with the rest of the city.

A three-year, £13 million project to redevelop a shopping parade, community hub, health centre and homes in Butetown began in 2010. The Loudoun Square development will include environmental aspects such as harvesting rain water.

The 2011 census included the following demographic information for Butetown:[1]

People identifying themselves as Welsh: 42.8%

A Welsh-speaking Anglican church also opened in the area in 1856 (All Saints on Tyndall Street; Welsh-language services moved elsewhere in 1870). One of the members of Butetown’s Welsh-speaking community was Evan Rees (Dyfed), a worker in the Bute Docks in the 1870s and a future Archdruid of Wales.[3]

The 1891 census showed that 15% of Butetown’s population could speak Welsh, significantly higher than the Cardiff average of 10.7%. Some parts had a particularly high percentage, such as the Loudon Square/James Street area (28%). During the twentieth century, however, the percentage declined, although Welsh-speakers remained a recognized part of the local community.[4]