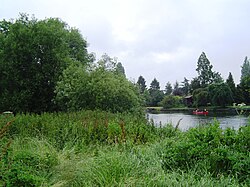 Buck Ait at the upstream end as it comes in to the bank. 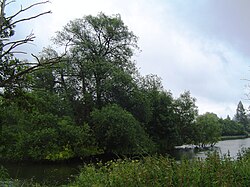 Buck Ait at the downstream end broken into islets.

Buck Ait is an island in the River Thames belonging to Berkshire. It is on the reach above Shiplake Lock near Sonning.[1]

The island is uninhabited and tree covered but sits opposite houses with extensive river frontages. The island shows the effect of soil movement, with the upstream end almost joined to the bank, and the downstream end broken into smaller islets.

The island derives its name from the eel bucks or traps that used to be placed here. There were reports in the late 19th century that they caused considerable hindrance to navigation. There were also eel bucks in St Patrick's Stream on the bank opposite upstream. This stream is believed to have been a tributary stream of the River Loddon which became an outfall when the water level was raised by the building of Shiplake Lock.[2]

Buck Ait is positioned towards the Oxfordshire bank of the river, but like neighbouring Hallsmead Ait, the county border passes it to the west.