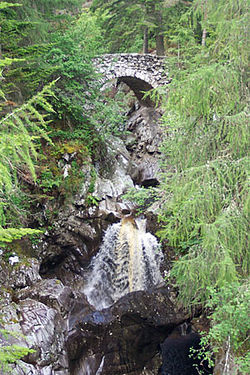 The Falls of Bruar

The Bruar Water is a mountain river of Perthshire, which ultimately becomes a tributary of the River Garry.

The river begins in the very north of the county, from the union of several headwater streams (at NN819804) which all rise close by the county border with Aberdeenshire, and from this junction the Bruar flows southwards unwaveringly though the Forest of Atholl. It creates one minor loch above Bruar Lodge, where it is bridged to carry a track.

Below Bruar Lodge, the river carves Glen Bruar, a valley of rugged beauty, for several miles, and enters the planted woods of the Atholl estate. The woods were planted by the Duke of Atholl from the end of the eighteenth century, for both beauty and profit.

Within these woods the river tumbles over the Falls of Bruar and shortly afterwards passes under the railway and the B8079 by the village of Bruar, and enters the Garry.