Broughton is a tiny village in Yorkshire, within the West Riding of the county three miles west of Skipton on the A59 road.

The 2011 census recorded a wider parish population of just 172. 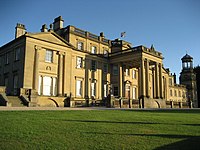 Broughton Hall is a Georgian country house at Broughton, placed in 3,000 acres of landscaped grounds. The hall itself, a Grade I listed building,[1] has been the seat of the Tempest family for 900 years.

The pedimented end wings were added to the main structure for Stephen Tempest, 1809–11, to designs by William Atkinson. Sir Charles Tempest, Bt. (1794–1865) refaced the north front in golden Kendal stone and added a portico, 1838–41, to designs by George Webster.[2] The park was landscaped in the 18th and 19th centuries and the Italianate terraced garden designed by William Andrews Nesfield in around 1855.

Within the grounds of the hall, in a series of reused outbuildings and new buildings, is a business park, with more than 50 companies employing more than 600 people.[3]