Breaston is a large village and civil parish in the south-east of Derbyshire near Long Eaton and close to the M1. The population of the civil parish as taken at the 2011 Census was 4,455.[1] 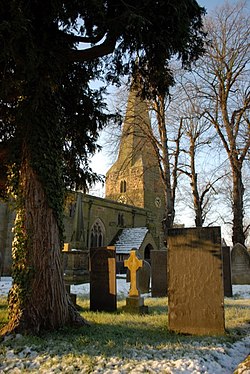 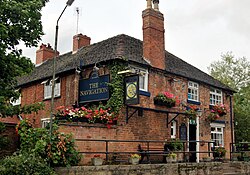 Breaston was mentioned in the Domesday Book as belonging to Henry de Ferrers[2] and being worth four shillings.[3]

Originally an agricultural village, Breaston has continued to grow for centuries until it has reached its current size, separated from neighbouring Long Eaton only by the M1 motorway.

Breaston today is mainly residential. There is a church (St Michael), a primary school, a Methodist chapel, three pubs (three of them still named as they were in 1846 - The Bulls Head, Chequers Inn[4] and The Navigation Inn); a medical centre and a comprehensive range of shops, including a Co-op, located in the centre of the village around the church and the village green. The green (known as Duffield Close) is said to be one of the largest in the country and an annual May Day Fete is held there.

The first Long Eaton railway station was on Sawley Lane, Breaston. First used in 1839, when the line opened, it was the third station on the line west from Nottingham. It was originally called Breaston, but the name was changed to Sawley railway station to avoid confusion with nearby Beeston.

Although only a relatively small village, Breaston is home to its fair share of sports teams.

Athletica FC who play on Breaston Recreation Ground in the winter months), Breaston Cricket Club, Formed in 1836 and play on the Soldiers and Sailors Ground, Risley Lane and Breaston Park FC, a child and youth football structure who have various teams at a range of age levels.

In early October 2014, reports emerged that Breaston may be the preferred location for the East Midlands Hub High Speed 2 Phase Two railway station, reverting earlier plans to base the station at Toton, Nottinghamshire.[5][6] These plans were ruled out by July 2015.[7]