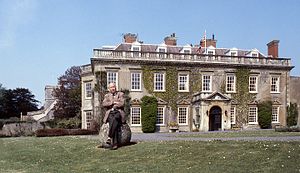 Percy Seymour, 18th Duke of Somerset (1910–1984) in front of his seat, Bradley House. All Saints Church is visible at left

Bradley House, or Maiden Bradley House, is a country house in the village of Maiden Bradley, Wiltshire, between the great country estates of Stourhead and Longleat. It is the family home of the Duke of Somerset, having been in the Seymour family for over 300 years.[1] The house is a plain stone structure, with few important architectural features.

Bradley House is listed Grade II on the National Heritage List for England.[2]

History of the manor

According to William Camden, the manor was named after the daughter of Manasser Biset, who during the reign of King Henry II (1154–1189) had found herself infected with leprosy and had founded on the site a hospital for women lepers. This account was dismissed as a fable by Gough and Tanner, who asserted it had been founded by Manasser Bisset himself. In about 1190 it was converted into an Augustinian priory by Hubert, Bishop of Salisbury.

At the Dissolution of the Monasteries, King Henry VIII (1509–1547) granted the priory to Edward Seymour, 1st Viscount Beauchamp (c.1500–1552)[3] (later 1st Duke of Somerset]and Lord Protector), the eldest brother of his third wife Queen Jane Seymour (d.1537), and mother of the future King Edward VI (1547–1553). It then descended briefly to Edward Seymour, 1st Earl of Hertford (1539–1621), the 1st Duke's eldest surviving son by his second marriage, whom he had made his heir, having suspected the legitimacy of his two sons from his first marriage, John Seymour (1527–1552) and Lord Edward Seymour (1529–1593) of Berry Pomeroy, Devon, whom in 1540 he excluded from their paternal and maternal inheritances with all their claims to their father's dignities being postponed to his children by his second wife. However, John Seymour (1527–1552) petitioned parliament for the restoration of his maternal inheritance, but as her lands had been sold, he was awarded compensation in the form of the estate of Maiden Bradley. He did not live to enjoy the grant and died in the Tower of London, having bequeathed it with all his other lands and goods to his younger brother Lord Edward Seymour,[3] ancestor of the present Duke of Somerset, whose seat it remains today.

Construction of the house was started by Sir Edward Seymour, 3rd Baronet Seymour of Berry Pomeroy (1610–1688). In about 1688 his son Sir Edward Seymour, 4th Baronet abandoned the previous family seat of Berry Pomeroy Castle in Devon, and used the proceeds derived from stripping the castle to fund improvements to the new house at Maiden Bradley.[4] This new Bradley House was completed in about 1710. It was a huge building, replaced in 1821[5] by a house only an eighth of the original size. Sir Edward Seymour, 6th Baronet inherited the dukedom from a distant cousin, and thus it became the seat of the Dukes of Somerset.

Adjacent to Bradley House is the Church of All Saints, which has 12th-century origins and is a Grade-I listed building.[6]

All Saints' Church is the principal burial place of the Dukes of Somerset. The church and the family cemetery are connected to the grounds of Bradley House by private access. Members of the Seymour family buried at the church include:

Algernon Seymour, 15th Duke of Somerset, and his wife Susan Seymour, Duchess of Somerset, are buried on Brimble Hill Clump near Bradley House. Their graves are in a little wood on a hilltop surrounded by agricultural land, with a metal fence around them, and marked by standing rough stones with small text plaques.[7]

At present the ground floor of the house is a wedding and party venue, and is open to other visitors by prior arrangement with or without a guided tour. The garden is also opened to the public on open days.[1]