Bonnybridge is a small town in Stirlingshire some four miles west of Falkirk, five miles north-east of Cumbernauld and eight miles south-southwest of Stirling. The town is situated near the Bonny Water which runs through the town and lies north of the Forth and Clyde Canal. To the south-east of Bonnybridge is a well preserved section of the Antonine Wall, and the remnants of Rough Castle Fort, the most complete of the surviving Roman forts of the wall.

According to the 2001 Census, the population stands at 6,870 residents. However, the Bonnybridge settlement area, which includes Banknock, Denny, Dunipace and Haggs has a total population of around 24,370.

Bonnybridge developed greatly during the industrial revolution in the nineteenth century. Significant industries that were established include paper milling, sawmilling, chemical manufacturing, refractory brick manufacture and whisky distilling. Particularly important for Bonnybridge was the establishment of several iron foundries including the famous Smith and Wellstood Foundry, which was important in introducing the American metal heating stoves to Europe under the 'Esse stoves' brand. The output from these foundries was transported via the Forth & Clyde Canal to local markets, and also to Glasgow for export. Bonnybridge was also particularly well served by rail, with the Glasgow to Edinburgh, Kilsyth and Bonnybridge and the Carlisle to Perth lines both nearby. With the canal and rail links Bonnybridge became a centre for industrial production. 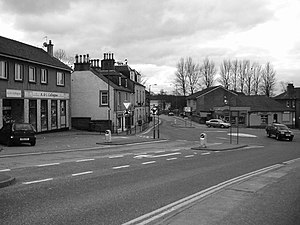 Bonnybridge Golf Club is located on the outskirts of Bonnybridge, off the A883. The course is just over 6,000 yards long.[1]

In recent years Bonnybridge has become known as the scene of numerous UFO sightings. It forms part of the Falkirk Triangle, an area stretching from Stirling to the outskirts of Edinburgh. UFO enthusiasts claim that Bonnybridge is the world's number one UFO location, with an average of around 300 sightings a year.[2]