The Bone Caves are a group of four limestone caves in the Assynt district of Sutherland which have revealed a remarkable collection of Ice Age bones, which have given the caves their name.

The caves are in a cliff known as 'Creag nan Uamh', which means "Crag of the Caves", above the valley of the Allt nan Uamh, on the north slope of Beinn an Fhuarain. The caves can be reached by a three to four mile walk from Inchnadamph, which stands at the south-eastern tip of Loch Assynt.

The caves are natural limestone caves, formed over many ages by the effect of water trickling through the cracks and fissures in the limestone and slowly dissolving the rock. Certainly the caves were here before the last Ice Age.

The caves here are only shallow and are the remains of a larger cave system that extended over a wide area, known as the Uamh an Claonaite system. Over thousands of years, the valley has gradually deepened, cutting away part of the cave system, and leaving the caves we see today high and dry on the valley side.

Within the Bone Caves of Inchnadamph have been found the bones of many species which lived in these parts in ancient times, many of them now extinct in Britain.

The bones include those of the Eurasian lynx, brown bear, Arctic fox and reindeer (dated to as long ago as 47,000 years ago). In 1995, explorers found the bones of a polar bear: this is the only evidence of polar bears so far found in Britain. There were also human skeletons dated to the 3rd millennium BC.[1][2][3]

The skeleton of a bear thought to be 11,000 years old or more was removed from the caves in 2008. The bones had originally been found by cavers in 1995 deep within the Uamh an Claonaite system and the original supposition was that this was the remains of a Cave Bear. The bones were passed on to the National Museums Scotland, to determine the age and species. It is presumed the animal died whilst hibernating and that its body was later washed further into the underground network.[4] 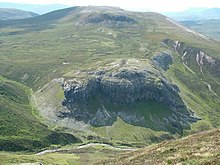