From Wikishire
(Redirected from Boldon)
Jump to: navigation, search

The Boldons are a group of three small villages in the north-east corner of County Durham:

The villages are close to the urban sprawl spread out from the towns on the River Tyne, in the gap between the Tyneside towns and Sunderland to the south-east. South Shields and Jarrow stand to the north.

'Boldun' was first recorded in print in 1170. Its origin is the Old English (Anglian) botl, meaning "settlement" or bold meaning "building", with either tun, meaning "village" or dun meaning "hill".

The Boldons are not recorded in the Domesday Book as this survey was not carried out in the jurrisdicton of the Bishop of Durham, but a century later, in 1183, the then Bishop of Durham conducted his own survey of County Durham, which became known as the Boldon Book, as the Bishop's manor in Boldon was listed early on and other manors' customal dues referred to it ("as at Boldon").

In 1866 work began sinking a pit at the foot of the hill that began producing coal in 1869, and was then known as Boldon New Winning. The village that developed nearby in the 1870s became known as Boldon Colliery. When the mine was deepened and extended in the 1910s, further housing to accommodate the workforce was built to the south of the pit in an area known as Boldon New Town.

In 1976, the Boldon Colliery Band appeared in episode 13 of the television series When the Boat Comes In.

The mine closed in 1982 but more jobs became available when an Asda supermarket opened in 1987. Further recent developments include Boldon Business Park. Boldon Colliery also has its own multi-screen cinema (currently operated by Cineworld). The main secondary school in the area is Boldon School, a specialist sports college (formerly Boldon Comprehensive School). There is also a primary school within Boldon Colliery, Hedworth Lane Primary and a nursery school, Boldon Nursery, a playgroup and a hotel.

There are conservation areas within the historic village centres of East and West Boldon.

Despite the relatively small geographical area, there are a significant number of older buildings considered as being of architectural merit including churches, public houses and former country houses, as well as modern additions. St. Nicholas Church in West Boldon is a Grade I listed building.

The area includes a wide range of housing styles, from Edwardian villas to Victorian terraces, post-war housing to more recent smaller-scale developments. The first street built in Boldon Colliery was Cross Row (also known as Sinkers Row) which was constructed to house the men who were initially employed to sink the shaft. Several years later, other major housing projects were started and terraced housing such as that at Arnold Street and Charles Street were built.

After the colliery was closed the former industrial land lay derelict for many years. In 2000, Colliery Wood was created with over 2,500 trees planted. The wood is popular with the local community and provides a habitat for animals such as pheasants, squirrels, woodpeckers and otters. Colliery Wood provides six new paths, which are also suitable for cycling and link to East Boldon, and Brockley Whins and Whiteleas in nearby South Shields.

Boldon Flats is another site important for nature conservation, which contains an area of damp pasture. The flats are flooded from each October to March and attract a wide array of bird life and a large population of common frogs.

West Boldon Lodge, constructed by the National Grid, is situated amongst a range of habitat, including wetland, grassland and woodland. Locally rare orchids are present at one site.[1]

The River Don traverses Boldon and is the last stronghold of water voles in this urban fringe of County Durham. 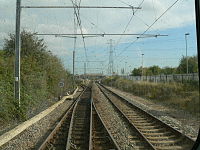 Decline and revival, providing a theme for many Tyneside towns, recent or proposed projects for the Boldens include linking the villages to the Metro light rapid transit system, new housing developments, new shops and further growth of the business park, road and cycleway improvements and a community woodland project in what is left of the woodland.

The recently built Quadrus Centre at Boldon Business Park houses entrepreneurial businesses and acts as a gateway to South Tyneside on the main A19 trunk road. The building features a modern design within its lakeside setting. The building is illuminated at night in a range of colours and has won many awards for its iconic design.

There is a King George V Playing Field of two and a half acres between West Boldon and South Shields, off Galsworthy Road in the latter.

Boldon School is now a sports college and holds host to a variety of different sports and events. It is the only school in the area with sports college status.