The village is to be found 12 miles north of Perth, bypassed (since 1977) by the A9 road, the main tourist route through Perthshire.

The town originated from the Victorian era with the coming of the railway in 1856, although the place and name is well known because of William Shakespeare's reference to Birnam Wood in Macbeth: whether this Birnam is meant by the Bard or another, the place of the village in the romantic imagination.

Until the construction of the railway, the only substantial building on the site of the present village was the church of Little Dunkeld parish, which still stands in its ancient position within a graveyard within the village. 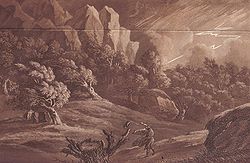 There is an ancient tree, the Birnam Oak, standing a few hundred yards from the centre of Birnam on Murthly Estate. In the past it was known as "The Hangman's Tree".[2]

John Everett Millais, who painted many local landscapes, and Beatrix Potter, who visited regularly with her family from their London home, often visited Birnam.

Birnam has The Beatrix Potter Exhibition and Garden, and The Birnam Arts and Conference Centre, a community run arts and performance centre with library.

The Birnam Highland Games is where the World Haggis Eating Championships are held.[3]