Birkby is a suburb of Huddersfield, in the West Riding of Yorkshire, close to the town centre. It has a population of 6,700.[1]

An affluent suburb during Victorian times, Birkby sits in the Grimescar Valley, a greenbelt area of Huddersfield. Birkby contains Norman Park, a small park with a play area and war memorial, which commemorates those who died in the First World War.[2]

It is believed that the name Birkby means "a village inhabited by people of both Viking and ancient Briton origins".[citation needed]

Much of the district of Birkby remained largely rural well into the 20th century, with the original settlement lying close to the town centre. Bay Hall, a local historic house dates from the 16th century but was largely restored in 1895, as a date plaque on the residence indicates. Birkby can effectively be bisected into two distinct areas; St Johns road being the main thoroughfare. Birkby is generally more affluent to the north and west of the main thoroughfare. Recently, Birkby has seen significant residential development, as the Hopkinson's Valve Works has been redeveloped for housing 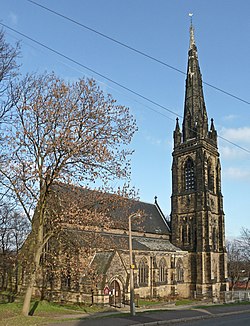 It has a catholic primary school, St Patrick's, as well as Birkby Infant and Nursery School, located on Blacker Road. Birkby Junior School is located to the east of Birkby. Birkby is a semi-rural area, home to a large white and Asian population, having four mosques. Elsewhere, the suburb contains two Church of England chapels, a Buddhist centre, as well as a meetinghouse for The Church of Jesus Christ of Latter-day Saints. The centre of Birkby, located around the east of Blacker Road and the north of St John's Road, has a high concentration of Asian retailers and food outlets, serving the local Asian community.

This Yorkshire article is a stub: help to improve Wikishire by building it up.
Retrieved from "https://wikishire.co.uk/w/index.php?title=Birkby,_West_Riding&oldid=65248"
Categories: