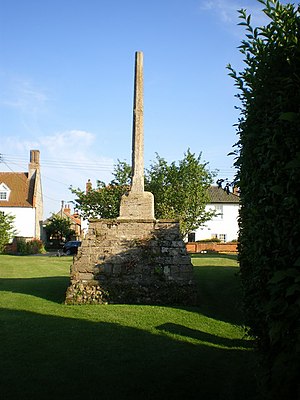 Binham Market Cross on the Green

Binham Market Cross stands on the village green of Binham in Norfolk, about 400 yards south of the parish church, Holy Cross Church, and the site of Binham Priory. It is one of the best surviving examples of a mediæval standing cross in the county. It is though missing the cross at its head, which was possibly destroyed by iconoclasts during the 16th or 17th century.

The cross stands on the green in the centre of the village. It was possibly erected by the monks of nearby Binham Priory in the 15th century. King Henry I in the early twelfth century granted a charter to Binham permitting the holding of an annual fair and a weekly market: fairs continued to be held on the green under the shadow of the Market Cross until the early 1950s.

The site is under the guardianship of English Heritage and managed by Binham Parochial Church Council.

The cross is of Barnack limestone and has a socket stone and separate shaft. The shaft stands on a stone base six feet tall and mortared flint rubble with stepped courses of stone blocks, capped by a platform of thin slabs.

The weathered remains of an ornamental moulding can still be seen part of the way up the shaft, but the stone cross that originally topped the shaft is missing.