Bernicia was an Anglo-Saxon kingdom established by English settlers in Great Britain in the 6th century and which in time was united with its southern neighbour, Deira to create the Kingdom of the Northumbrians. Bernicia's territory stretched from the River Tees in the south to the Firth of Forth in the north, encompassing broadly County Durham, Northumberland, Berwickshire, Roxburghshire, Selkirkshire, Peeblesshire and the Lothians, and, with uncertain borders, lands to the west. Its first capital was at Bamburgh.

The people of the kingdom were known as the Beornice or the Bernice and their kingdom was accordingly Beornica rice; the Kingdom of the Beornice. The name "Bernicia" is a Latinisation. 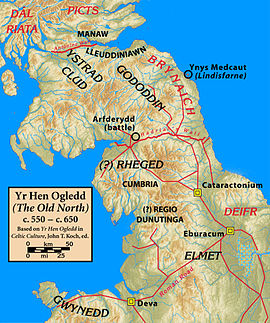 In the 9th-century the Welsh historian Nennius, in his Historia Brittonum, gives Bernicia the Welsh name Berneich or Birneich and in Old Welsh poetry and elsewhere under the name of Bryneich or Brynaich. This may reflect the name of a preceding Brittonic kingdom or province, which was subsequently adopted by the English settlers and rendered as Bernice or Beornice in the Old English tongue. Alternatively, Bryneich may simply be a Welsh rendering of the English name, but if so, it is unclear why Welsh would need to borrow a foreign name for the area, so the former hypothesis is usually accepted. No etymological analysis has produced a consensus.

The etymology which is most widely cited is that tentatively proposed by Kenneth H. Jackson, which gives the meaning "Land of the Mountain Passes" or "Land of the Gaps".[1] The earlier derivation from the tribal name of the Brigantes has been dismissed as linguistically unsound.[2] In 1997 John T. Koch suggested the conflation of a probable primary form *Bernech with the native form *Brïγent for the old civitas Brigantum as a result of Anglian expansion in that territory during the 7th century.[3]

The Old English name may be influenced in its form by the word "Beorn", meaning roughly "warrior hero".

Whatever the etymology, other linguistic evidence suggests political activity in the area before the advent of the English tribes arriving from Germany. A few important English centres in Bernicia bear names of British origin or are known by British names elsewhere: Bamburgh is called Din Guaire in the Historia Brittonum; Dunbar (where Saint Wilfrid was once imprisoned) represents Dinbaer; and the name of Coldingham is given by Bede as Coludi urbs ("town of Colud"), where Colud seems to represent the British form, possibly for the hill-fort of St Abb's Head.[4]

The Brythonic kingdom of the area was formed from what had once been the southern lands of the Votadini, possibly as part of the division of a supposed 'great northern realm' of Coel Hen in c. AD 420. This northern realm is referred to by Welsh scholars as Yr Hen Ogledd or, literally, "The Old North". The kingdom may have been ruled from the site that later became the English Bamburgh, which certainly features in Welsh sources as Din Guardi. Near this high-status residence lay the island of Lindisfarne (formerly known, in Welsh, as Ynys Metcaut), which became the seat of the Bernician bishops. It is unknown when the Angles finally conquered the whole region, but around 604 is likely.

There are several Old Welsh pedigrees of princely "Men of the North" (Gwŷr y Gogledd) which may represent the kings of the British kingdom in the area, which may have been called Bryneich. John Morris surmised that the line of a certain Morcant Bulc referred to these monarchs, chiefly because he identified this man as the murderer of Urien Rheged who was, at the time, besieging Lindisfarne.[5] 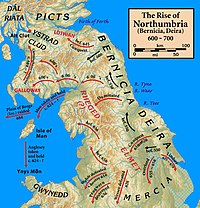 The English presence in the land predates the accepted "Coming of the English": Germanic mercenaries were employed by the Romans on Hadrian's Wall during the late Roman period. Whether these formed a colony significant enough to be a kernel of the future kingdom cannot be known. It is assumed that the great bulk of the population came across the sea from Angeln, in what is now Northernmost Germany and southern Denmark, or from colonies further south in Britain.

The first historically attested English King of the Bernicians is King Ida, who is said to have obtained the throne and the kingdom about 547. His sons spent many years fighting a united force from the surrounding Brythonic kingdoms until their alliance collapsed into civil war.

Ida’s grandson, Æthelfrith (Æðelfriþ), united Deira with his own kingdom by force around the year 604. He ruled the two kingdoms together, their conjoined people known as the Northumbrians (Norþanhymbre; those north of the Humber.) His reign ended when he was defeated and slain in battle by Rædwald of King of the East Anglians (who had given refuge to Edwin, son of Ælle, king of Deira) around the year 616. Edwin then became king of the Northumbrians.

The early part of Edwin's reign was possibly spent finishing off the remaining resistance coming from the Britons (Wealas) on his borders and possibly within After he had defeated the remaining Welsh population of the area, he was then drawn towards similar subjugation of the Welsh kingdom of Elmet which had hitherto survived in the Pennines, in the modern-day West Riding of Yorkshire, near Leeds). This conquest drew him into direct conflict with the Welsh kings of the west.

At the disastrous Battle of Hatfield Chase on 12 October 633, Edwin was defeated and killed by Cadwallon ap Cadfan of Gwynedd and Penda of the Mercians. Northumbria again was divided into Bernicia and Deira. Bernicia was then briefly ruled by Eanfrith, son of Æthelfrith, but after about a year he went to Cadwallon to sue for peace and was killed. Eanfrith's brother Oswald then raised an army and finally defeated Cadwallon at the Battle of Heavenfield in 634. After this victory, Oswald appears to have been recognised by both Bernicians and Deirans as king of a permanently united Northumbria. The kings of Bernicia were thereafter supreme in that kingdom, and even after Oswald was slain by King Penda at Maserfelþ (Oswestry, Northumbria remained united, although Deira had its own sub-kings at times during the reigns of Oswy and his son Ecgfrith.