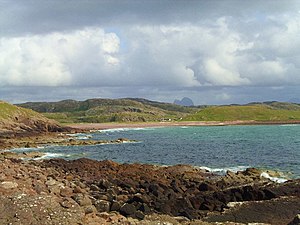 The Bay of Stoer

The Bay of Stoer is a minor bay on the west coast of Sutherland, looking out onto the northern mouth of the Minch, just south of the broad peninsula known as Stoer Head.

A similar bay, the Bay of Clachtoll, is immediately to the south on the coast. The village of Clachtoll stands between the two bays, and Stoer, a village as small, sits by the shore of the Bay of Stoer itself.

There is a small sandy beach in the bay. The remains of a broch on the southern shore of the bay tells of ancient occupation. The cliffs fringing the northern edge of the bay have caves.