The Battersea Railway Bridge is a bridge carrying the railway across the River Thames between Battersea on the southern, Surrey bank and and the extreme north-east part of Fulham on the northern, Middlesex bank. It was originally called the Cremorne Bridge after the riverside public gardens in Chelsea, and formerly it was commonly referred to as the Battersea New Bridge.

The north end of the bridge is ar Chelsea Harbour or Imperial Wharf a 21st century-rebuilt area on the south side of a Chelsea Creek. The bridge is used by the West London Line of the London Overground from Clapham Junction to Willesden Junction. 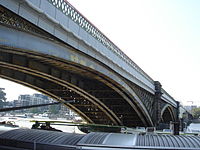 The bridge was designed by William Baker,[1] chief engineer of the London and North Western Railway, and was opened on 2 March 1863[2] at a cost of £87,000.[3] It carries two tracks and consists of five 120-foot lattice girder arches set on stone piers.[4]

A three-arch brick viaduct carries the line on the north side of the bridge, with one arch having been opened to provide a pedestrian route under the railway, as part of the Thames Path.

On the south side are four arches, two of which are used as storage for the residents of a houseboat community moored immediately downstream.[4] Completion of a plaza containing a residential/leisure tower, Lombard Wharf is scheduled for 2017 immediately south-west of the bridge. The plans for which have entailed re-opening an arch of the viaduct to provide a continuous boardwalk.[5]

The bridge was strengthened and refurbished in 1969, and again in 1992. During a high tide in late 2003, the structure was struck by a refuse-barge damaging some lower structural elements significantly: repairs were completed in early 2004.[6]

In November 2013, planning permission was granted for the Diamond Jubilee Footbridge, extending the two central piers of the bridge upstream.[7]

Trains crossing are subject to a 20/30 mph speed limit (locomotive-hauled traffic is restricted to 20 mph, all other traffic is limited to 30 mph).[2]

The bridge was declared a Grade II* listed structure in 2008.[8]