Barrowby is a village and parish in the Kesteven part of Lincolnshire. It is two miles west of Grantham town centre in a position overlooking the Vale of Belvoir. It has a Grade-I-listed parish church. The hamlet of Casthorpe is part of the parish.

The first written records for Barrowby are in the Domesday Book of 1086, in which the village is referred to as "Bergebi", thought to derive from Scandinavian languages 'berg-by' meaning 'village by the hill'. The Domesday record shows that there was a church with a priest and 60 acres of meadow.

The Domesday village of Casthorpe is a mile and a half west from Barrowby. By the 14th century it was referred to in records as two holdings, East[3] and West[4] Casthorpe. It is now little more than a cluster of farm buildings.[5] A further deserted mediæval village is Newbo, 1.5 miles (2.4 km) to the north-west, which was located by archaeologists in 1970.[6]

Barrowby is situated where the A52 road crosses the A1 road which separates the village from the western edge of Grantham. The village is close to the Lincolnshire border with Leicestershire and Nottinghamshire.

Barrowby is 300 ft above sea level, and adjacent to the Vale of Belvoir. From the village can be seen Belvoir Castle, Lincoln Cathedral, and power stations in the Trent valley, including West Burton and Cottam, near Gainsborough over 40 miles away. 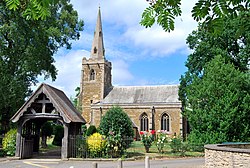 There has been a Barrowby fête or gala in various forms since the 1950s. From 2004 until recently, an annual Barrowby Gala and Beer Festival was held on the village green. The event, with stalls, games, fairground rides, and tug of war, was organised by a committee of village residents.[citation needed]

Barrowby combines old buildings, cottages and manor houses, with newer buildings in a housing estate built within the last few decades. Linking the new housing estate and the original Barrowby centre are two main roads, High Road and Low Road. Some surrounding road names reflect the names of patrons and residents who established and shaped the village.[7]

Barrowby contains a post office, a cafe, a butcher's and a British Legion Club. The village public house is The White Swan. Until 1959 there was a second public house, The Marquis of Granby Inn,[8] situated at the corner of Welby Court and Main Street. It is pictured in a 1910 postcard of the village.

The Anglican Grade-I-listed parish church, dedicated to All Saints, was built between the 13th and 14th centuries from ironstone and limestone, in the Early English and Perpendicular Gothic styles. The church was extensively restored in 1852 and 1870.[9] It includes a mediæval door on the south side of the chancel, a humorous corbel at the foot of a south window, depicting a head that seems to have been pinched out of place by the adjacent buttress, and a blocked north door. Significant internal features include stained-glass windows.[10]

The ecclesiastical parish belongs to the Barrowby and Great Gonerby group in the Deanery of Grantham, Diocese of Lincoln. The incumbent is Rev Peter Hopkin.s[11] Services are held in Gonerby and at All Saints.[12]

Barrowby parish school was built in 1852 adjacent to the church. Part of the original school hall and bell tower remain. It has since been modernised with additional new buildings. It has a school roll of approximately 240 pupils from 4–11 years and has received Basic Skills Mark, Healthy Schools, and Eco-Schools Silver Status awards.[13][14]