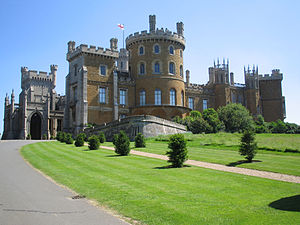 Belvoir in the late 19th century

The 10th Duke outside Belvoir Castle

Belvoir Castle is a stately home in Leicestershire, overlooking the Vale of Belvoir. It is a Grade-I listed building.[1] The county border with Lincolnshire passes through the grounds to the east of the castle such that most of the walled garden is actually in that county.

The castle is the seat of the Dukes of Rutland; a corner of the castle provides their family home, and the grounds contain the family mausoleum.

Belvoir Castle is near several villages, including Redmile, Woolsthorpe, Knipton, Harston, Harlaxton, Croxton Kerrial and Bottesford, and the town of Grantham. John Leland, the antiquary, wrote in the 16th century that the "castle stands on the very nape of a high hill, steep up each way, partly by nature, partly by the working of men's hands".[2]

A Norman castle originally stood on the high ground in this spot. During the Civil War, it was one of the more notable strongholds of the king's supporters. It eventually passed into the hands of the Dukes of Rutland and following a fire, was rebuilt by the wife of the 5th Duke, and gained its present Gothic castle look. The architect James Wyatt was chiefly responsible for this restructuring, and the result is a building which bears a superficial resemblance to a mediæval castle, its central tower reminiscent of Windsor Castle. The present Castle is the fourth building to have stood on the site since Norman times.

It is said that afternoon tea was invented at Belvoir. The story goes that whilst visiting Belvoir Castle in the 1840s, Anna Russell, Duchess of Bedford found that the normal time for dinner was between 7:00 and 8:30 p.m. Luncheon was a relatively recent innovation, and just a light midday meal, and so to fill the empty stomachs of the long afternoon she developed a light meal of tea (usually Darjeeling) and cakes or sandwiches as the perfect balance. The Duchess found taking an afternoon snack to be such a perfect refreshment that she soon began inviting her friends to join her. Afternoon tea quickly became an established and convivial repast in many middle- and upper-class households.

The castle is opened to the public and contains many works of art. The Queen's Royal Lancers Regimental Museum of the 17th and 21st Lancers was established here in 1964 but was required to leave in October 2007. The highlights of the tour are the lavish staterooms, the most famous being the Elizabeth Saloon (named after the wife of the 5th Duke), the Regents Gallery and the Roman inspired State Dining Room.

The castle sits in a vast estate of almost 15,000 acres. The landscaped grounds, nearer the castle, are also open and the Root Houses, built by the fifth Duke's wife, can also be seen. The present Duchess is restoring Belvoir Gardens, which includes the Secret Valley Garden and the Rustic Summerhouse of 1800.

The estate is open to the public and offers a range of outdoor activities – shooting, fishing, quad biking and four-by-four driving. Throughout the year they host sheep, duck and dog exhibitions.

The Duke and Duchess of Rutland also own but do not manage The Manners Arms in Knipton, a country hotel and restaurant on the Belvoir estate.[4]

Several films and television programmes have used it as a location, notably:

Belvoir Castle is the host of Belvoir Fireworks,[5] an annual pyrotechnic and firework competition that takes place in mid-August.

The grounds also host Belvoir Cricket Club[6] in Knipton, a village cricket club with teams playing in various leagues across Nottinghamshire. The 1st XI play in the Nottinghamshire Premier League.

In August 2010 the castle's website was mistakenly hacked and taken over by an Algerian group who blanked the pages and inserted anti-Semitic texts in Arabic. The hackers had mistaken Belvoir Castle for Belvoir Fortress, which is in Israel.[8]

In September 2010, the Belvoir Wassailers – the castle's own male voice choir – was reformed at the request of the Duchess. Directed by Robert-John Edwards, and accompanied on the piano by Paul Emmett, the Belvoir Wassailers performed at the castle's annual "Belvoir by Candlelight" celebration in December 2010. The choir is currently working on a variety of new material, including popular and folk music.