Ballintoy is a small village, townland and parish on the wild north coast of County Antrim. The village sits alongside the B15 coast road, 17 miles north-east of Coleraine, and five miles west of Ballycastle, between the latter and Bushmills. Its harbour is less than a mile from the village but reached only down a narrow, steep road winding down to the cliff-bound coast.

The name of the village is from the Gaelic Baile an Tuaigh, meaning "Northern townland".

Ballintoy Harbour is a tiny, delightful, isolated fishing harbour, reached down its winding lane down Knocksaughey hill, which passes by the entrance to Larrybane and Carrick-a-Rede Rope Bridge. The waters are rocky and the passage narrow to this safer haven. At the harbour on Easter day each year a Dawn Service is held.

By the harbour is a large, abandoned lime kiln, once an important industry: the resulting quicklime would be shipped straight out for the harbour. Here two are two large caves, carved by the sea but now separated from it by a coastal path.

The harbour was used as a location in the second season of HBO's mediæval fantasy series Game of Thrones; it played the fictional village of Lordsport.[1]

There has been no significant development within the village in the past and, as a result, Ballintoy's population has slowly declined and was only 165 people in the 2001. The village has modest commercial and social facilities including tourist accommodation, restaurants, several small shops, and two churches. The best known church is the distinctive white Ballintoy Parish Church on the hill above the harbour. The village was originally built around a single street separating the inland pastures from the strip fields running towards the sea. Two of the village’s oldest hotels and pubs, the Carrick-A-Rede Hotel and the Fullerton Arms, still stand on this street.

In 2011 residents objected to the erection of bilingual street signs in English and Irish in a petition sent to the district council after an application was requested for an English/Irish sign at Harbour Road opposite the local Church of Ireland.[2] 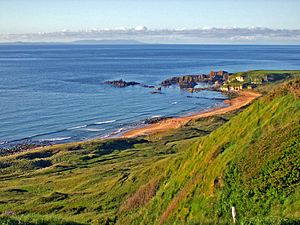