Bagnor is a hamlet in western Berkshire, close to the largest town in that part of the county, Newbury. The village stands on the banks of the River Lambourn. It is best known as the home of the nationally famous Watermill Theatre.

The village pub is The Blackbird, which has stood in the village since the 17th century.[1] Nearby villages include Speen, Donnington, Boxford, and Winterbourne. Donnington Castle lies less than a mile to the east.

"Humphrey the Chamberlain holds Bagenore from the King. Wulfeva held it freehold from King Edward. Then it answered for 4 hides; now 1 hide. Land for 3 ploughs: In hardship 1 (plough) 3 villagers and 3 smallholders with 2 ploughs. 1 slave: a mill at 20s meadow 22 acres: woodland at 4pigs".

The Watermill Theatre is a privately owned repertory theatre which has operated since 1981. It is a converted watermill with gardens beside the River Lambourn, and seats 220 people. It retains many of its original architectural features such as the waterwheel, which is viewed through a screen on entry to the auditorium. Many successful actors have begun their careers at the Watermill Theatre, most notably Sean Bean, Bill Nighy and David Suchet.[3] It is one of only five theatres to have been awarded a National Touring remit by the Arts Council, and previous productions have subsequently moved to the West End and even New York.[4]

Bagnor Manor is a country home standing near the centre of the village. The house in its current form dates from the 17th century. Previously the manor and its estate had been held for the King, and was recorded in the Domesday Book. Ownership was later transferred to Henry de Bagenore, who sold the property to the Priory and Convent of Poughley in 1232. The transfer was agreed in return for a yearly payment of 8 marks, food and clothing for Henry's two sons, and an agreement that the Prior would find a suitor for his youngest daughter, Celestria.

The priory was dissolved in 1524 and its lands seized by Henry VIII. The Manor was granted to Wolsey College (later Christ Church), Oxford in 1531. Bagnor Manor was later transferred to the Dean and Chapter of Westminster in return for lands in St. James's Park. They built the present Grade II listed building[5] in the 17th century.

The estate passed into private ownership only in 1871, when it was purchased by a wealthy family from Donnington Grove. Until 2007 it was home of the art collector and property developer Baron Palumbo, who installed many artworks in the house and grounds. It is now a private residence.[6] 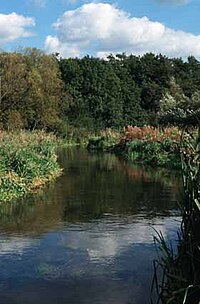 The River Lambourn in Rack Marsh

Rack Marsh is a small nature reserve in the village which is managed by the Berks, Bucks & Oxon Wildlife Trust.[7] It is designated as a Site of Special Scientific Interest.

The marsh was the scene of protests during the construction of the Newbury bypass, which passes close to the east of the village.