Ayot St Lawrence is a small village in Hertfordshire, between Harpenden and Welwyn. There are several other Ayots in the area, including Ayot Green and Ayot St Peter.

George Bernard Shaw lived in the village, at Shaw's Corner, from 1906 until his death in 1950; his ashes are scattered there.[1][2] The house is open to the public as a National Trust property.[3]

Another resident of the village was the Shaws' friend, neighbour and bibliographer Stephen Winsten and his wife, Claire.

The village has two churches. The old one, in the centre of the village, was partially demolished in 1775, because it was obstructing the view from Sir Lionel Lyde's new home.[5]

The new St Lawrence church was designed in the Palladian style by Nicholas Revett[6] and features a neo-classical Grecian frontage with Doric columns; a thing unheard of amongst church-builders at the time but very much in tune with the Grecian Revival which Revett had begun after a voyage to Athens. The portico is copied from the Temple of Apollo at Delos and the wings originally carried copies of the monument of Lysicrates in Athens. Overall though, behind the grand frontage, it is a Palladian rather than Greek building.

In the outer aedicules stand the urns to Sir Lionel Lyde and his wife, one at each end; a local story is that they are so placed because they could not stand being near each other. 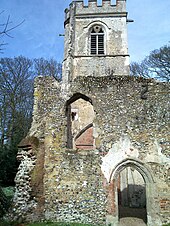