Ault Hucknall is a village in north-eastern Derbyshire. Local residents describe the settlement as the 'smallest village in England', as it consists of only a church and three houses. Beside it however is a grand house of the Cavendish family, now fallen into the hands of the National Trust, namely Hardwick Hall.

The name of the village is a mixture of languages: 'Hucknall' is the Old English Huccan halh ('Hucca's nook of land'), while the prefix 'Ault' is the Old French for 'high', which serves to distinguish this parish from Hucknall in neighbouring Nottinghamshire.[1]

Thomas Hobbes, the founder of all modern political philosophy, is buried interred within the parish church, St John the Baptist. He spent his last years at Hardwick Hall, supported by his lifelong patron, the Duke of Devonshire, and died there in 1679.[2] 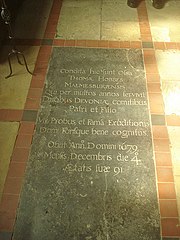 Notwithstanding the diminutive size of the village, it has a parish church, St John the Baptist. The church dates from the 11th century with features from the 14th and 15th centuries. It underwent a restoration between 1885 and 1888 by William Butterfield.[3]

The pipe organ was installed by Brindley & Foster around 1905.[4]

The church contains memorials to Anne Keighley, wife of William Cavendish, 1st Earl of Devonshire, and to Thomas Hobbes, the founder of modern political philosophy, who died at nearby Hardwick Hall in 1679, having been a guest in his last years of the Cavendish family.

Hardwick Hall stands within the parish boundary. It was built by Bess of Hardwick in 1590–1597, from whom it was inherited by the Cavendish Family, the Earls and later Dukes of Devonshire. While Chatsworth House, also in Derbyshire, was the main seat of the Earls and Dukes, Hardwick was another important family home until 1956, when it came into the hands of the National Trust.