Doe Lea is a small, linear village in northern Derbyshire, beside the little River Doe Lea.

The village runs along the old A617 road (now bypassed by a newer dual carriageway) close to the unforgiving course of the M1 motorway: Doe Lea is beside Junction 29.

Nearby stands a grand country home, Hardwick Hall, now in the hands of the National Trust.

Lower down, the river reaches an industrial landscape where in the past it became dangerously polluted, but here in the upper stream it is a young, barely sullied river. In 2005 the river and banks were given a makeover: a new path was laid down, about 30 new trees were planted. The work was carried out by The Doe Lea Valley Community Partnership, a group of volunteers from Doe Lea and surrounding areas. Work is still being carried out and is still being maintained by the group. 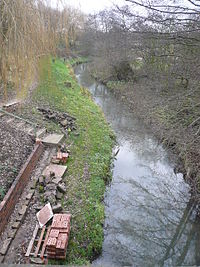 The River Doe Lea near the village

The village has a public house and a community centre. The River Doe Lea runs through the village, and Doe Lea local nature reserve is located nearby.[1][2]

Doe Lea is near the villages of Bramley Vale, Glapwell, Heath and Stainsby; the latter hosts the annual Stainsby Festival.