Ashridge House is a country house on the border of Buckinghamshire with Hertfordshire, at the edge of the National Trust’s wooded Ashridge Estate, of which it was once the great house when both were in private hands. The county border runs through the dining room.

The house is one of the largest Gothic Revival country houses in Britain, and is a Grade I listed building.[1]

Before the current house was built, this was the site of Ashridge Priory, a priory built in the 13th Century and dissolved at the Reformation. John William Egerton, 7th Earl of Bridgewater and the owner of the estate had the remaining buildings of the priory demolished in 1800. After the earldom had in short order become extinct and been revived for The Earl commissioned the architect James Wyatt to build a new house to be his home, in the neo-Gothic style – a break from the Palladian style which predominated for country houses throughout the Georgian Age. Wyatt died in 1813 and the project was completed the following year by his nephew Jeffry Wyatt (later known as Sir Jeffry Wyatville).[2] The present house is regarded as one of the finest examples of early Gothic Revival architecture and is now a Grade I listed building.[3]

The Earl also built the Bridgewater Monument, in commemoration of his cousin, 'the Canal Duke', from whom he inherited the estate. It stands up the hill a mile and a haalf from the house – from the north front of Ashridge House a broad vista cut through the forest leads away to the hill summit where the monument stands, now the property of the National Trust. 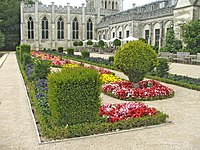 In 1848 the estate passed to the Earls Brownlow, another strand of the Egerton family,[4] and then in 1921 th estate was split, with the land passing to the National Trust, while the house and garden was acquired by speculators.

In 1928, Urban Hanlon Broughton purchased the house as a gift for the Conservative Party in order to provide a college for training Conservative leaders and to commemorate the late Andrew Bonar Law,[2] who had served as Prime Minister between 1922 and 1923. In July 1929, Ashridge was opened by Stanley Baldwin as a College under the governance of the Bonar Law Memorial Trust (BLMT).[5] The trust created a "College of Citizenship", established to help the Conservative Party to develop its intellectual forces in struggles with left-wing organisations such as the Fabian Society.[6] It became a cross between a think-tank and a training centre and had the famed Arthur Bryant as its educational adviser.

Part of the estate became Ashridge Golf Club in 1932, and had Henry Cotton as its club professional in the late 1930s, including his most successful year 1937.[7]

During the Second World War, the building and the lawn in front of it was used as a secondary site for Charing Cross Hospital.[8]

After the War the "College of Citizenship" was briefly revived, but in 1959 it was re-launched as a College to provide management training, which remains its role.

Ashridge House was built on the site of the 13th-Century priory building which had been demolished in 1800. Some parts of the old priory were incorporated into the house by James Wyatt, including the undercroft of the monastic refectory, featuring two aisles, seven bays and a rib-vaulted ceiling, which he repurposed as a beer cellar below the dining room and drawing room.[1] 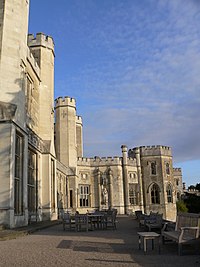 Decorative crenellations on the house

The mansion is built of ashlar faced with Totternhoe stone with a castellated parapet and low-pitched slate roofs. It features a variety of casement windows including pointed arch and ogee lights typical of the early Gothic Revival style. Before his untimely death, James Wyatt completed the north-facing front entrance and the central block, containing the state apartments and western courtyards. Jeffry Wyatt added private apartment blocks at an angle to the main building and an orangery with a turret in 1815–17. The main entrance features a projecting porte-cochère and octagonal turrets, added by Jeffry Wyatt c.1814.[1]

Inside the mansion are a number of richly decorated state rooms; of the interior features, only the hall, the staircase tower and the chapel are Gothic in design. The high staircase hall features a stone stair with iron railing, surrounded by niches containing statues by Sir Richard Westmacott. At the centre of the fan-vaulted ceiling is a large dial connected to the weather vane on the roof which displays the current wind direction.

The Brownlow Hall contains a giant frieze of the goddess Venus surrounded by putti with an armorial centrepiece and three early-Twentieth Century murals.

Redecoration of the interiors was commissioned by Lady Marian Alford and executed in the neoclassical architecture|neoclassical style in 1855–63 by Sir Matthew Digby Wyatt, including a replica of Guido Reni's Aurora ceiling and aedicular door surrounds. Among the alterations carried out after the conversion of the mansion into a college, the conservatory was altered by Clough Williams-Ellis in 1919 to form a dining-room. 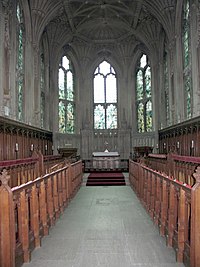 The house incorporates a Gothic Revival Chapel designed by James Wyatt, completed by Jeffry Wyatt in 1817. The most notable exterior feature of the chapel is its spire which was demolished in 1922 by Lord Brownlow as it had become structurally unsound. The spire which can be seen today is in fact a fibreglass replica which was erected in 1969. The chapel interior features a pair of Fourteenth-Century carved doors, fan-vaulted coving supporting a canted panelled ceiling; a set of carved oak choir stalls designed by Jeffry; and an array of Rayonnant lancet windows.[9] The windows were originally fitted with stained glass panels depicting scenes from the Bible; the glass was imported by the 7th Earl from Germany, having been originally designed in the Sixteenth Century for Steinfeld Abbey and Mariawald Abbey. The glass was auctioned off at Sotheby's in 1928 and acquired by the Victoria and Albert Museum.[10] One glass panel featuring the the Virgin Mary was placed in the nearby Church of Ss Peter and Paul at Little Gaddesden; another, depicting St Peter was in Christ Church in Croydon, Surrey. Beneath the chapel is a vaulted medieval wellhouse with a 224-foot well.[1]

Outside the house stands the timber-frame and brick Fourteenth-Century Monks' Barn in the Monks' Garden. It was remodelled in 1816 by Jeffry Wyatt who added a covered walkway. In 1884 Mathew Digby Wyatt added the red brick Fern House.[1]

Ashridge Business School is constituted as a registered charity, formally named the 'Ashridge (Bonar Law Memorial) Trust',[11] and is one of the 150 largest charitable organisations in the United Kingdom ranked by annual expenditure.[12] The trust has the following goals:

(a) honouring the memory of a great statesman,
(b) the preservation of the house and grounds as an historic building,
(c) to create an educational centre
(d) to train lecturers, speakers and writers to further the study of the subjects outlined above
(e) provide lectures and/or discussions on these subjects open to the public or for those who had paid fees to attend,
(f) provide a supporting staff,
(g) to allow boarding by those attending the lectures and discussions.[13]