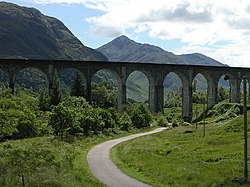 Arisaig and Moidart is a parish in the far south-west of Inverness-shire formed from the Arisaig and Moidart peninsulas. It therefore encompasses all the land between Lochs Morar to the north and Shiel to the south. It is bounded by Glenelg to the north, Kilmallie to the north-east and Ardgour and Ardnamurchan in Argyllshire to the east and south.

Villages in hamlets in the parish include Arisaig, Back of Keppoch, Dalnabreck, Glenancross, Glenfinnan, Kinlochmoidart, Lochailort and Roshven. The northern part of the parish is served by the A830 road from Glenfinnan to Glenancross. At Lochailort this road is joined by the A861 which serves the southern part. Despite the remoteness of the area it boasts several railway stations on the spectacular West Highland Line from Glasgow to Mallaig, namely those of Glenfinnan, Lochailort, Beasdale and Arisaig.