Ardwell is a coastal village in Wigtownshire, on the shore of Luce Bay in the southern part of the Rhins of Galloway, looking over the North Channel towards the Antrim coast. Its name is from Gaelic, from Àrd Bhaile meaning "high townland".

The A716 road to Drummore and the Mull of Galloway passes through the village. The only other street is Ardwell Park, a street of new houses. 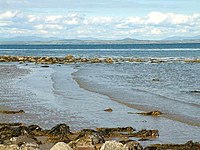 The community is served by the nearby Ardwell Church, a small public church with a bell tower, built in 1900-1902.[1]

Ardwell used to hold the Leek Fair, where plants were sold.[2]

Many of the houses are still owned by Ardwell Estates, and Ardwell House is located around one half mile west of the village in the grounds of Ardwell Garden and looking across Ardwell Pond.

In the grounds of Ardwell House, on a ridge above the road, are the remains of a mediæval motte; the castle bailey may have stood to the north.[3] In addition, south of the church are the ruins of Killaser Castle,[4][5] the ancestral home of the McCullochs, who formerly held Ardwell.[2] 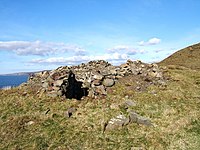 Near High Ardwell, on the other side of the peninsula, are the remains of Doon Castle, the best example of an Iron Age broch in Galloway.[6][7]

Ardwell Gardens is a 970-acres garden surrounding the 18th-century Ardwell House.[8][9] It has a walled garden, and a large pond which has ducks and swans with an approximately half-hour walk round it. There is also access to Ardwell church (to the west) and Ardwell village (to the east) with a beach and boat shop.[10]

Logan Botanic Garden, a branch of the Royal Botanic Garden Edinburgh, is 2 miles from Ardwell. Logan's mild climate allows a variety of exotic plants to grow outdoors.[11] There are many beautiful plants which can be found in few other gardens in Britain. It has a woodland garden, and a walled garden and a terrace garden with an avenue of Chusan palms.