Ardvreck Castle is a ruined castle dating from the 16th century which stands on a rocky promontory jutting out into Loch Assynt in Sutherland. One can reach the ruins by driving along the A837 which follows the north shore of Loch Assynt from the village of Inchnadamph. Visitors should take care when walking around the site as falling masonry is a possible danger.

The castle is thought to have been built around 1590 by the Clan MacLeod, whose chiefs owned Assynt and the surrounding area from the 13th century onwards. Sutherland has long been a stronghold of the Clan MacLeod.

There are legends about this place but true history too. The most well known historical tale concerning the castle is that on 30 April 1650, James, Marquis of Montrose was captured by the Laird of Assynt and held at the castle before being transported to Edinburgh for trial and execution.[1] Montrose was a Royalist, fighting on the side of King Charles against the Covenanters, who took control of the kingdom after the King was beheaded in London. Montrose, in their power, was executed on 21 May 1650, by hanging, drawing and quartering. In 1660 the monarchy was restored and the next year Montrose's covenanter enemy, Archibald Marquis of Argyll, was himself executed.[1]

In 1672, Clan MacKenzie attacked and captured Ardvreck Castle, and then took control of the Assynt lands. In 1726 they built a more modern manor house nearby, Calda House, which takes its name from the Calda Burn beside which it stands. A fire destroyed the house under mysterious circumstances one night in 1737 (see below) and both Calda House and Ardvreck Castle stand as ruins today.[2]

Ardvreck Castle was a rectangular-shaped keep comprising three storeys. Under the castle the vaulted basement is pierced by gunloops and the round stair turret is corbelled out to support a square caphouse. Despite the small size of the ruined tower, Ardvreck was originally a large and imposing structure and it is thought that the castle included a walled garden and formal courtyard. The remains of the foundations can still be seen and cover a large area. Unfortunately, all that remains today is a tower and part of a defensive wall. When the waters of the loch rise very high, the peninsula on which the castle stands can be cut off from the mainland. 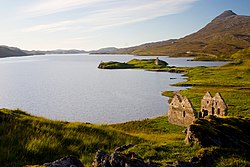 The ruins of Calda House, looking to the castle

Local legend tells that MacLeod was assisted in building the castle by the Devil himself, and as a price the MacLeod offered his daughter, Eimhir, in marriage to the fiend. However rather than submit to wed the Devil, the girl leapt to her death in the loch.

Around Inchnadamph another layer is added to the tale: they insist that Eimhir plunged into the caverns of the Loch, hiding from the Devil, and made a new home beneath the water's surface, becoming the elusive 'Mermaid of Assynt': some would claim to have sighted her, weeping on the rocks, her body now transformed into half woman, half sea creature. The legend is used to account for natural changes in the landscape: when the loch's waters rise above their normal levels, legend tells that these are Eimhir's tears mourning her life lost on the land.