Althorne is a village and parish in the Dengie hundred of Essex. It is located 13 miles east-south-east of the county town and city of Chelmsford. The village has its own Parish Council.[1]

Althorne is on the Dengie peninsula, about three miles north-west of Burnham-on-Crouch. It is approximately two miles north-west of the centre of Bridgemarsh Island in the River Crouch. The village of Althorne is connected to London, by the Southminster Branch Line, which links Wickford to London Liverpool Street Station. The local railway station is called Althorne, though the station itself is cut adrift from the main village, only accessible from a long and steep track leading up to the edge of Althorne. There are no A roads close to the village - the main roads being the B1010 to Burnham and the B1018 road from Maldon to nearby Southminster.

The name Althorne has an unusual meaning in Old English, translating as '(place at) the burnt thorn-tree'. The name is composed of the words æled ('burnt') and thorn ('thorn-tree'). The earliest known recording of the village was in 1198 as Aledhorn.

Althorne was home to Phillip Scott Burge who was one of the top British fighter aces in World War One with 11 enemy kills between March and July 1918. He was killed when he was shot down over Seclin, France on 24 July 1918. 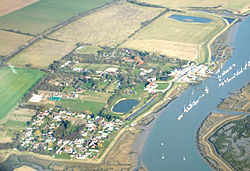 The Marina is approximately one to two miles from the village and close to Althorne railway station. It is reached by Bridgemarsh Lane, an unserviced road. The Marina is situated on Althorne Creek. On the south side of the creek is Bridgemarsh Island.