Wickford is a town in the south of Essex, located approximately 30 miles east of London. It has a population of more than 33,000 as of the 2011 census.

Wickford has become a commuter town, serving the City of London through its direct connection to Liverpool Street station on the Southend Victoria line, on which a train to London takes approximately 40 minutes. The town can also be easily reached via the road network by the A127 between London and Southend-on-Sea or by the A130 from Chelmsford.

Wickford's main high street includes a range of shops. A swimming pool, a library, an open-air market and a community centre are also within the vicinity of the town centre.

Including this, Wickford also incorporates a small estate called Shotgate, home to many residents. Shotgate features a row of village shops and a children's play area and park.

Wickford has a history going back over two thousand years. There is evidence that the area itself was inhabited in prehistoric times probably by a tribe of Britons called Trinovantes. There was a Roman military marching camp on the Beauchamps Farm site, which was succeeded by a Roman villa. This is now the site of Beauchamps High School. This area on higher ground was the historic core of Wickford, the site of the manor house and the parish church of St Catherine's. Over time the commercial centre of Wickford has migrated westwards, towards the modern High Street on the other side of the River Crouch.[2]

The place-name Wickford is first attested in a Saxon charter of 995, where it appears as Wicford. It appears in the Domesday Book of 1086 as Wincfort. The name means 'ford by a wych elm or ford by a dairy-farm'.[3]

Before the 20th century Wickford was an agricultural village. At the time of the Domesday Survey, six land-holders were recorded. Historically there have been only two considerable estates in Wickford, the manor of Wickford Hall and the manor of Stilemans. Robert Wikeford or de Wickford (1330–90), Archbishop of Dublin, was born in Wickford, and his family are thought to have been Lords of the Manor of Wickford Hall.[4]

Wickford was the birthplace of Elizabeth Reade (1615–72), the second wife of John Winthrop the Younger (1606–76), Governor of Connecticut, and a step-daughter of Hugh Peter (1598–1660), a prominent supporter of the Parliamentary caus during the English Civil War.The village of Wickford in Rhode Island, United States, is believed to have been named after this town.

Wickford became the birthplace of Naturism in the United Kingdom. In 1922 the English Gymnosophist Society was formed and had its home in the town.

During the Second World War the edge of the town was hit by a German doodlebug, and on 6 December 1944 a V-2 rocket fell in Branksome Avenue, about a mile west of the town centre. Around the town, in amongst the hedgerows and fields, there are numerous pillboxes constructed as a part of British anti-invasion preparations.

In 1958 Wickford town centre was hit by a flood which made national news headlines. The most striking image of the flood was a double-decker bus, left stranded at Halls Corner overnight, partly submerged by the floodwater. A second flood in 1960 meant changes to the course of the River Crouch were made. This included turning the river into a concrete channel through the centre of the town. 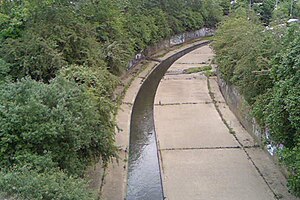 The River Crouch flows through Wickford in a concrete bank designed to protect the town from flooding.

The Wick Country Park comprises 50 acres of former agricultural land, with over a mile of easy access trails around the site. The trails leads visitors past old hedgerows, the five-acre lake, ponds, World War II pillboxes and recent woodland plantings, with bridges and boardwalks that allow the trails to continue over the North Benfleet brook.