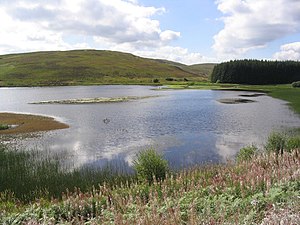 Alemoor Loch is a small freshwater loch, which has been expanded into a reservoir, in Selkirkshire. It is on the course of the Ale Water, six miles west of Hawick and close by the Roxburghshire boundary. The loch today is approximately a mile and a half long. It is divided in two by a causeway which carries the B711 road.

In the 19th century, the loch was recorded as being round in shape, a quarter of a mile long and broad, and up to 30 fathoms deep.[1]

The loch was said to be the home of a "water-cow" or kelpie, and another tradition told of a child being carried off by an eagle and dropped into the loch.[2] John Leyden (1775–1811) mentioned the darker associations of the loch in his 1803 poem Scenes of Infancy.[2]

Sad is the wail that floats o'er Alemuir's lake,
And nightly bids her gulfs unbottomed quake:
While moonbeams sailing o'er the waters blue
Reveal the frequent tinge of blood-red hue.

In the 1960s a dam was built and the loch was enlarged to its present size. No kelpies were spotted during the work.

Sights about and within the water

An existing farmhouse was not removed during the work to create the reservoir, and its chimney pots can be seen in when the water level is extremely low.

The remains of a tower at Wester Alemoor, which had formerly stood by the loch, were destroyed by a new road before 1962.[3] A large flint blade was discovered by the loch in 2003.[4]

The loch is now used for coarse fishing, with the main species being pike, perch and roach.[5]