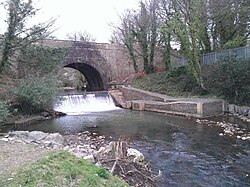 The weir and fish leap at Pontymoile. The bridge carries the Monmouthshire and Brecon Canal

The Afon Lwyd (meaning Grey River in the Welsh language) is a 13-mile long river in Monmouthshire. It flows from its source north of Blaenavon, through Abersychan, Pontnewynydd, Pontypool, Llanfrechfa and Cwmbran before flowing into the River Usk at Caerleon, which subsequently flows into the Bristol Channel in Newport.

The river was severely affected by pollution from industry and mine discharge, and fly tipping, but during the 1980s efforts were made to improve the water quality of river and improve fish stocks. To aid this, the Environment Agency built a fish leap at Pontymoile in 2010 enabling fish to ascend past the weir there. By late 2011 it was claimed that the river was in its cleanest state since mediæval times.[1]

Historically the river has also been known as the Torfaen - meaning 'Breaker of Stones' - which gives some indication of the force of the river during surges.

The geography of the river's location, as well as how local towns affect run off, has meant that during heavy periods of rainfall the river can quickly become a torrent and localised flash floods are not uncommon.[2] The last major flood of the river occurred in the 1930s.

Beginning in March 2010, the Friends of Afon Llwyd (FOAL) project is a partnership between Torfaen County Borough Council and two local angling clubs in Cwmbran and Pontypool aiming to improve the river as a habitat for salmon, sea trout and brown trout.[3] The Wye and Usk Foundation also received £130,000 of funding to remove invasive weeds, manage bank erosion, create fish leaps, drop weirs and improve community engagement with the river both by fishing and other means.[4] Nearly £750,000 has and will be spent improving the river.

A major effort of the FOAL project has been to lower a weir that blocked upstream fish migration at Ty Nant Ddu, Pontypool. In 2008, salmon were spotted here. Additionally, similar efforts were made at the weir located near Cwmavon. To further improve fish stocks (especially salmonid) 'V' weirs were constructed to trap gravel and create suitable spawning habitats.[5]

At the river's source in Blaenavon, Conservation Volunteers and the Forgotten Landscapes Partnership are re-greening the river where it runs through the Blaenavon World Heritage Site.

The river has been invaded by the American signal crayfish which has affected the native protected white-clawed crayfish. Not only do the invading species fight for food resources but they also carry crayfish plague, to which the native species has no immunity.[6]