From Wikishire
(Redirected from Adley Moor)
Jump to: navigation, search 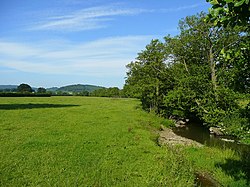 Adley Moor Common with Coxall Knoll in the distance. The River Redlake is to the right. 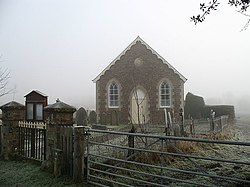 Coxall Baptist Chapel, which is situated near the village of Bedstone.

Buckton and Coxall is a civil parish in northern Herefordshire. It corresponds to the township of the ancient parish of Bucknell, the remainder of which lies in Shropshire. According to the 2001 census, Buckton and Coxall had a population of 102.

Coxall has a Baptist chapel[1] situated on the B4367 road, where there is a Royal Mail post box too.[2] The chapel and post box are on the other side of the Heart of Wales railway line from the main part of the hamlet, in Shropshire. Buckton is a larger hamlet and has a bridge (Buckton Bridge) over the River Teme.[3] There was a Roman fort at Buckton.[4]

Adley Moor (or Adleymoor) is another small hamlet in the parish and lies between Coxall and Jay (a small hamlet in neighbouring Leintwardine civil parish). Between Adley Moor and Jay is a small piece of common land (Adley Moor/Adleymoor Common). The River Redlake flows through the parish, passing Coxall and Adley Moor, before joining the River Clun at Jay.[3]

The Herefordshire Trail long-distance footpath passes through the southern part of the parish, on its way between the nearby Herefordshire villages of Brampton Bryan and Leintwardine.[5]

Coxall Knoll is a notable wooded hill in the vicinity, with an Iron Age hill fort atop. It straddles the Shropshire-Herefordshire border, with the fort and peak being on the Shropshire side.[3] The Salopian village of Bucknell is about one mile to the west, on the other side of the Knoll.[3]