Aberthin is a small village in the ancient parish of Llanblethian, just outside Cowbridge in Glamorgan. It is situated on the north side of a shallow valley, less than a mile north-east of Cowbridge across the A48 road.[1] Cowbridge Comprehensive School lies just to the south-west of the village. To the south is an old quarry, with a "faulted strip of grey oolite".[2] Aberthin is also the name of a brook, the River Aberthin.[3] The village was served by the Aberthin Platform railway station between 1905 and 1920, now a field to the west of Aberthin.

In English, it is pronounced with emphasis on the second syllable, unlike most town names which begin with 'Aber'. Many locals pronounce the short 'e' in 'aber' as an elongated 'u'. The village's name is apparently a derivation of the name of the brook, Nant y Berthyn. 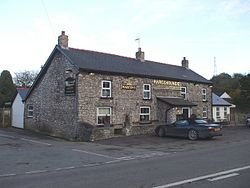 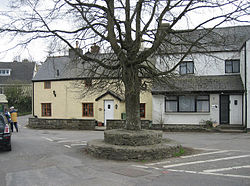 It has no shops, but does have two pubs, a village hall which when built in 1749 was created as Wales's second purpose-built Calvinistic Methodist meeting house,[4] and a notable tree in the middle of the roundabout. The Methodist church and village was visited in 1746 by Howell Harries and it was at the church where Peter Williams gave a speech in which he was disowned by the Methodists.[5] Houses in the area include Llansannor Court and the Great House.[1]

The village hall committee organises many events throughout the year, such as a duck race (where plastic yellow ducks are raced down the stream), a free bonfire and fireworks display (held on the Downs overlooking the village), quiz nights, amateur dramatics, barn dances, and an annual Village Day, which has a barbecue, live music and a dog show.