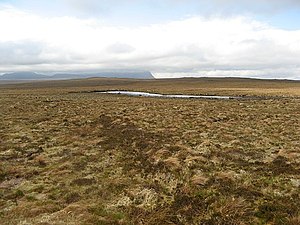 A view across the blanket bog, towards Ben Hope

A' Mhòine is a broad peninsula on the north coast of Sutherland and thus of Great Britain, bounded to the west by Loch Eriboll and to the east by the Kyle of Tongue.

The A838 North Coast road crosses the peninsula from east to west.

Eriboll East and Whiten Head, at the western and northern sides of the peninsula respectively, are designated as part of a 'special landscape area'.[2]

In 2018, the peninsula was selected as the site for the United Kingdom's first spaceport; to launch satellites northwards and into a polar orbit. Launches could first take place in the early 2020s.[3][4]