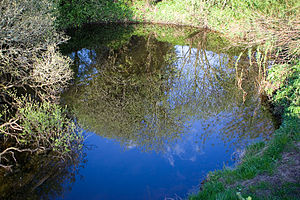 Shannon Pot is a pool in the karst landscape near Cuilcagh Mountain in County Cavan, in the Republic of Ireland. It is a remarkle sight as a lake; a circular pot 52½ feet in diameter and it is the source of Ireland's longer river, the Shannon.

The pool is an aquifer-fed naturally fluctuating pool. It was first explored by divers in 1971 to a depth of 20 feet. It was later explored by Martyn Farr among others to a depth of 31 feet from where the water emerges from a fissure 2 yards wide.[1] In early 2009 the pot was dived to a depth of 48 feet by Artur Kozłowski, who entered an unstable chamber.[2]

Towns and villages near the Shannon Pot include Dowra, Blacklion and Glangevlin.

According to legend, the Shannon is named after Sionnan, who was the granddaughter of Manannán mac Lir, the god of the sea. She came to this spot to eat the forbidden fruit of the Tree of Knowledge, which was planted by the Druids. As she began to eat it, the waters of the pool sprang up and overwhelmed her. She was drawn down into the pool and its water began to flow over the land, forming the River Shannon. 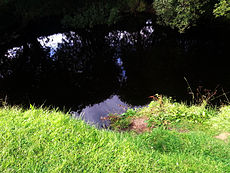 The waters of the Shannon Pot

Surveys have defined a 4.9-square mile (12.8-km²) immediate drainage basin covering the slopes of Cuilcagh. This area includes Garvagh Lough, a mile and a half to the northeast of the pot. Water from Garvagh drains into Pollnaowen<refname="n">'Poll nm1:' hole, pit, sink, leak, aperture (The Pocket Oxford Irish Dictionary – Irish-English) </ref> sink, before emerging at Shannon Pot.[1]

The highest point in the catchment is a spring at Tiltinbane on the western end of the Cuilcagh mountain ridge; this sources an unnamed stream which itself feeds into Shannon Cave. Further sinks that source the pot include Pollboy and, through Shannon Cave, Pollahune in County Cavan and Polltullyard and Tullyrrakeeragh in Fermanagh.[1]

Surveys suggest that Shannon Pot may once have had a much bigger basin. In times of high flow it has been shown to be hydrologically linked to Badger Pot and Pigeon Pot beside Florencecourt Forest Park, Fermanagh.[1]