Difference between revisions of "Prestatyn"

Prestatyn is a seaside resort town in Flintshire. It stands on the Irish Sea coast, to the east of Rhyl. At the 2001, Prestatyn had a population of 18,496.[1] 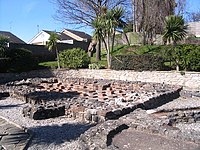 There is evidence of occupation of the lands about today's town from long before the town itself, and indeed since prehistoric times. Prehistoric tools found in the caves of Craig Fawr, in the nearby village of Meliden, have revealed the existence of early human habitation in the area.

The remains of a Roman bath house have been found and excavated. These are believed to have been part of a fort on the Roman road from Chester to Caernarfon. However, if there was more to 'Roman Prestatyn', much of it has been destroyed as houses have been built over un-excavated land. 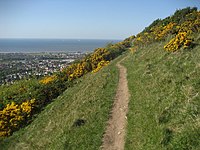 The name of Prestatyn is Old English and derives from preosta tun ("priests' town"). It was recorded in the Domesday Book of 1086, under the Cheshire entries, as Prestetone.[2][3] Unlike similarly derived names in England, which generally lost their penultimate syllable and became "Preston", this village's name has taken from its English origin to become Welsh, developing a typically Welsh emphasis on the penultimate syllable and a modification of "ton" to "tyn", as also happened at Mostyn.[4]

An earth mound, visible in fields to the south of the railway station, near Nant Hall, marks the site of an early wooden motte and bailey castle, probably built by the Norman Robert de Banastre about 1157, which was destroyed by Owain Gwynedd in 1167.[5][6] The Banastre family then moved to Bank Hall in Lancashire.

The town appears to have been primarily a fishing village for hundreds of years. The beginning and end of High Street today marks the location of two manor houses called Pendre (translated as "end of" or "top of town") and Penisadre ("lower end of the town").

The town's population remained at less than a thousand until the arrival of the railways and the holidaymakers in the 19th and 20th centuries. "Sunny Prestatyn" became famous for its beach, clean seas and promenade entertainers, and visiting for a bathe was considered very healthful by city dwelling Victorians. During the Second World War the holiday camps were used as billets for British soldiers. Despite being close to Liverpool, the area was not bombed by the Luftwaffe, but was one of the few British towns to be bombed by the Regia Aeronautica (the Italian Air Force) in June 1941. 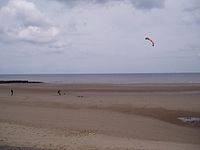 Although Prestatyn remains a tourist destination and resort town, the decline of the British holiday means the town is diversifying.

Work is under way on the revival of the Ffrith Beach Festival Gardens. After a troubled few years when the seafront site has lain deserted, attractions are planned (for example, 10-pin bowling, quad bikes, dance studio and yoghurt bar) to breathe fresh life into the resort.

The town is located at the northern end of the Offa's Dyke Path, although not on Offa's Dyke itself. It also marks the eastern end of the North Wales Path, a long-distance coastal route to Bangor. Other attractions include the remains of Roman baths and the nearby Neolithic mound, The Gop.

The North Hoyle Offshore Wind Farm was opened in 2003. Situated in Liverpool Bay, five miles off the coast of Prestatyn, it was the UK's first major offshore wind farm. It comprises 30 wind turbines with a combined maximum capacity of 60 megawatts - enough to power 40,000 homes.

Prestatyn Carnival is the major annual summer event in the town, and features field events, competitions and a procession. Each year, thousands take part in the festivities. The Carnival celebrated its Golden Jubilee in 2001.

The traditional Carnival Parade takes place on the Saturday, and is followed by a Carnival Baby Competition later in the day. In 2008 the Carnival became a two-day event with the Sunday designated "Fun on the Field" day, providing a host of events include a talent show and dance competition.[7][8]

In 2008, Prestatyn Carnival Association revived the Miss Prestatyn title. Miss Prestatyn attends many local events and civic functions and is somewhat of a local celebrity.[9]

Philip Larkin once wrote a poem entitled "Sunny Prestatyn", in which he describes a poster advertising the resort that is progressively defaced by graffiti.