Irishtown is a village of County Dublin once outside the walls of the City of Dublin but now deep within the latter’s conurbation.

Irishtown grew outside of Dublin, about a mile west of the mediæval city walls. It is said to have been formed as a settlement in the 15th century for those native Irishmen who were expelled from the city at that time to preserve Dublin as an English city. The Irish inhabitants of Dublin were expelled from the city proper in about 1454, in line with the Statutes of Kilkenny, and were only allowed to trade inside the city limits by daylight.

At the end of the 19th century and into the early 20th century, Irishtown was the location of the Waxies' Dargle, an annual outing by Dublin cobblers ("waxies"), which a well-known folk song recalls.[1] 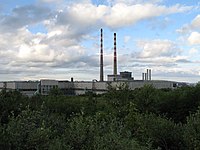 The Irishtown Nature Park is a small park with a walkway which offers several kilometres of walking trails along the Poolbeg Peninsula.