Difference between revisions of "Burreth, Lincolnshire" 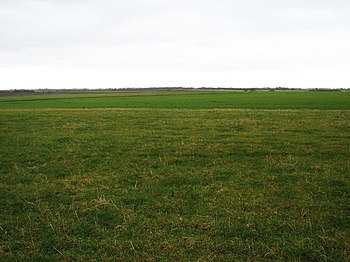 The site of the mediæval village of Burreth (right, distance)

Burreth (also occasionally Burgrede)[1] is a now-deserted village in Lindsey, the northern part of Lincolnshire.

Burreth's entry in the Domesday Book

In the late 13th century, the manor of Burreth was held by Robert de Neville, who held it two-thirds from the Earl of Lincoln and one-third from the Bishop of Lincoln.[2] For the purposes of the 1377 poll tax, the village possessed 74 taxable individuals, and it paid £1 4s.[3]

Burreth is found recorded in the Domesday Book of 1086 and is last recorded as extant in 1381.

Although the village itself is extinct, the parish of Burreth remains, now as the Parish of Tupholme. Burreth had a village church dedicated to St Peter and was under the auspices of Tupholme Abbey; the last recorded priest died in 1349 during the Black Death.[4]

Earthworks and crop marks are visible from aerial photography, as well as a moat, a mound that local legend has as the site of the church, and what Historic England describes as "a confused area to the southeast, probably house steadings but mutilated by surface quarrying". Original stone, pottery and tile of the buildings have been found, including the possible outline of the church, 52 feet by 30 feet.[4] Burreth was home to at least one hermit in the 13th century.[5]

The most recent archaeological survey to have been carried out was in 1964, although since then much further ploughing has reduced the searchable area of the village.