Buckingham, despite its diminished status since King Henry's time, is a bustling small market town with much variety in its commercial and retail life. Its heart is its historic market place, where a market held on Tuesday and Saturday, and an additional farmers' market held on the first Tuesday of each month. The market place has several 18th century buildings giving character to Buckingham.

Capability Brown's historic formal garden design at Stowe, west of the town, is an important attraction in the care of the National Trust.

There is a mediæval well on the south side of the dismantled railway which borders the town. The well, which is now dry for much of the year, was positioned to exploit the spring line below the crest of a north facing slope overlooking the town.

The town is home to one of the United Kingdom's two private universities, the University of Buckingham. Unlike other British universities, most of its students are from overseas. 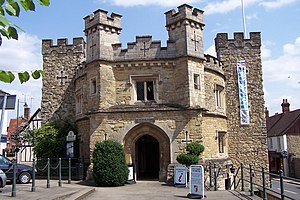 Buckingham is of Anglo-Saxon origin, its name referring to an otherwise unknown kin, the Buccingas ("Bucca's folk"). The first settlement was located around the top of a loop in the River Great Ouse, presently the Hunter Street campus of the University of Buckingham.

Between the 7th century and the 11th century, Buckingham was amidst the struggle between the Vikings and English, changing hands between Engle and Dane several times by the fortune of war. In 914 the army of Edward the Elder, King of the English, encamped in Buckingham for four weeks, forcing local Danish leaders to surrender.[2] Afterwards a fort was built where Buckingham's parish church now stands.[2]

In 1529, King Henry VIII declared Aylesbury to be the county town of Buckinghamshire in place of Buckingham. (As Aylesbury Manor belonged to Thomas Boleyn, the father of Anne Boleyn it was rumoured that the change was made in order to curry favour with Thomas.)

The town received its royal charter in 1554 when Queen Mary I created it a free borough with broad boundaries, governed by a bailiff, twelve principal burgesses and a steward.[3]

The Legend of Saint Romwald 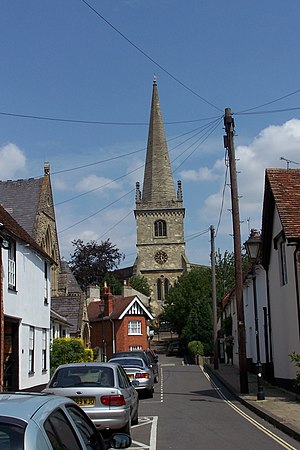 SS Peter and Paul, Buckingham viewed from the south west.

A mediæval legend tells that St Rumwold is buried in Buckingham. It says that Rumwold was the infant grandson of Penda King of the Mercians (626 - 655). He lived just three days but in that time he repeatedly professed his Christian faith and asked for baptism. [4]

The parish church at Strixton in Northamptonshire is dedicated to St Rumwold and the small Yorkshire town of Romaldkirk may also be named after him.