Buckden is a sizable village in in Huntingdonshire. A thriving and historic village, it stands by the A1, midway between Huntingdon and St Neots, some 6 miles south of the former, and close by Brampton. It was once known as "Bugden".

Buckden's most remarkable feature is Buckden Towers, once a favourite palace of the Bishops of Lincoln, once of the most powerful positions in the Middle Ages.

The village and about it

The population is around 3,000. The Great North Road ran through the middle of the village, whose legacy in coaching inns is still visible, but as the A1 expanded, the village was bypassed in 1962. There is a roundabout on the A1, with the B661 (Perry Road, leading out to Grafham Water).

Buckden Towers stands in the middle of the village. The harmonious contrast between the redbrick Great Tower and the yellow-grey stone of St Mary's church has remained miraculously unspoilt over the centuries. Catherine of Aragon after her divorce from King Henry VIII was imprisoned here, but whether she appreciated the architecture is not recorded.

The stagecoaches running day and night between London and the North, made Buckden prosperous, but when the Victorian railway boom killed coach travel, Buckden entered a quiet period, famous only as the first night's stop for penny-farthing cyclists racing from Knightsbridge to John O' Groats. Then the growing popularity of the motor-car revived the Great North Road.

To the east are The Offords on the B1043. Two miles to the north is the A14 and along the B1514 is RAF Brampton to the north-east. A widening and diversion of the A14, known as CHUMMS may see the A14 placed only a mile from the village. 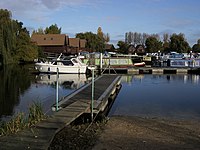 The village has a Church of England Primary School and a Day Nursery. There is a library and three village pubs — The George, The Vine and the The Lion Hotel — all located on High Street. The church is dedicated to St Mary. There is Waterside Leisure Club to the east and a village club.