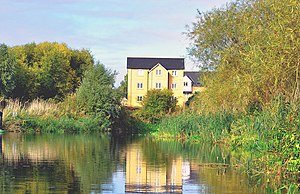 The Offords are a pair of small and pretty villages nestled along the east bank of the River Great Ouse between St Neots and Huntingdon. The villages are:

Offord Cluny and Offord D'Arcy both stand along the road from Godmanchester to St Neots, with Great Paxton to the south of them and nothing but fields and farms to the north until Godmanchester to the north. They are on the eastern bank of the Great Ouse, with just the main railway line rudely interposing itself between the villages and the riverbank. From Offord Cluny a lane crosses by three bridges across the various streams of the Ouse towards Buckden.

They are two villages are contiguous along the road. They are separate villages, and were separate parishes for centuries until the church in Offord D'Arcy closed, but they work closely together as one.

The more northerly village is Offord Cluny; it has developed considerably since it first took its name from the Abbey of Cluny in Burgundy which was Lord of the Manor here from the 11th to 15th centuries. Offord D'Arcy, the larger of the two parishes, has also developed but still contains original Roman work.

The parish church of Offord Cluny is All Saints Church, which is less than half a mile away from St. Peter's Church in Offord D'Arcy. The latter is a redundant church cared for by the Redundant Churches Fund

The village hall in Offord Cluny and the Church Rooms in Offord D'Arcy serve both communities. The Village pub is the Horseshoe Inn at Offord D'Arcy. There is also a Baptist church, a Primary School and a newly formed Millennium Green for use by everyone in the two Parishes.