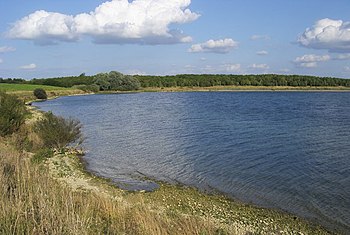 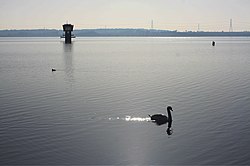 Grafham Water is a man-make lake in Huntingdonshire serving as a reservoir, but more popularly known as a place for water sports and leisure time. It is between the villages of Grafham and Perry.

Grafham Water has a circumference of about 10 miles and is the eighth largest reservoir in Britain by volume and the third largest by area, at 1,550 acres.

It is popular for a range of leisure activities. Boating on Grafham Water is popular and fly fishing by its banks. There are walks around the lake and it is a popular cycling destination.

The lake was created by filling a valley full of water. In contrast to Rutland Water, no villages lay in the way of the new reservoir but a great deal of farmland was lost.

Water is retained by an earth and concrete dam built in 1965 and is extracted and processed at an adjacent treatment plant before being piped away as drinking water.

The water level can be controlled constantly by the pumps which pump water from the River Great Ouse nearby. There are two pumping stations associated with the reservoir. One is located just behind the dam, the other at Offord Cluny alongside the Great Ouse. At times of high potential flood risk, Grafham Water treatment works can increase the amount of water it takes up to maximum capacity (72.5 million gallons a day if its not already at maximum capacity) to help reduce the risk of flooding along the river.

The reservoir was immediately colonised by wildlife and a nature reserve surrounding the western side of the reservoir was soon created to help maintain and enhance the site's potential.[1] The nature reserve contains semi-natural ancient (at least 400 years old) woodlands and more recent plantation woodlands, grasslands and wetland habitats such as reedbeds, willow and open water.[2]

As of January 2011, Grafham Water was the first in the United Kingdom, to harbour the invasive killer shrimp (Dikerogammarus villosus).[3][4]