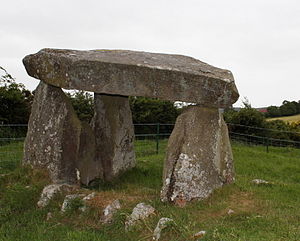 Ballykeel Dolmen is a Neolithic tripod portal tomb at the foot of the western flank of Slieve Gullion, above a tributary of the Forkhill river, in the south of County Armagh

The tomb is a State Care Historic Monument.[1]

The dolmen stands at the southern end of a large cairn, of approximately 100 feet by 35 feet, the north end of which also contains a cist. Its ten-foot long capstone, with a notable notch similar to that of Legananny Dolmen, had previously fallen, but was re-set during excavations in 1963.[2]