Ballina is a town in north County Mayo. It lies at the mouth of the River Moy near Killala Bay, in the Moy valley and Parish of Kilmoremoy, with the Ox Mountains to the east and the Nephin Beg mountains to the west. The town straddles the River Moy, which here forms the county border with Sligo. It also occupies two baronies: Tirawley on the west bank of the Moy and Tireragh on its east banks. The town's name is from the Irish Béal an Átha, meaning "mouth of the ford".

According to Encyclopædia Britannica the first signs of settlement on the site of the town dates from around 1375 when an Augustinian friary was founded. Belleek, now part of the town, pre-dates the town’s formation, and can be dated back to the late 15th century, or early 16th century. However, what is now known as Belleek Castle was built in 1831. Ballina was officially established as a town in 1723 by O'Hara, Lord Tyrawley.

The Belleek estate once occupied lands from the Moy River to the modern-day Killala Road. This included part of the ‘Old French Road’ which General Humbert marched on from Killala, and beside part of which in the Killala Road-Belleek area was Belleek’s reservoir – presumably destroyed in the construction of Coca-Cola’s ‘Ballina Beverages’ factory; the ‘Old French Road’ is now closed off at that point. 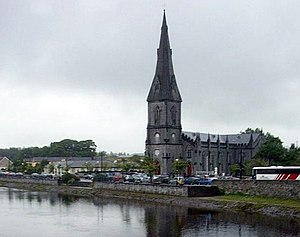 St Muredach's Cathedral on the banks of the River Moy in Ballina
The town has some notable architecture, including the 15th-century Moyne Abbey, and St Muredach's Cathedral, which is the Cathedral Church of the Roman Catholic Diocese of Killala. Work on the Cathedral began in 1827. The stone was quarried locally and the roof and ceiling were completed before the Great Famine (1845). The spire was completed in 1855 and by 1875 the organ had been commissioned.

The N26 is the main road to Dublin. It leaves the town south to Foxford, and after Swinford joins the N5 to Dublin. The N59 comes from Belmullet and Crossmolina in the west, goes through the town to Sligo to the northeast. The R314 is a regional road to Killala, and then Ballycastle. The R294 goes to south County Sligo via 'the Windy Gap' in the Ox Mountains. It is used as an alternative route to Dublin, via Tubbercurry and Boyle.

There are two main bridges straddling the Moy in the town centre. The first, the Armstrong and West, or Lower bridge, was built in 1835. The second, the Hamm bridge or Upper bridge, was built in the following year of 1836 by Thomas Hamm at a cost of £3,000.00. Both bridges are limestone, and have four and five arches respectively. Traffic flows in a one-way direction around these two bridges and is often heavily backed up on both sides, the reason for calls for a third bridge further down the river. 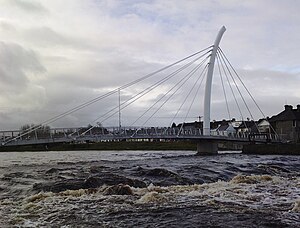 Ballina Bus Station is host to a Bus Éireann bus depot. Bus Éireann have stated that they intend to develop services similar to the 24-hour Dublin-Belfast route on the Ballina-Dublin route.[3] The route currently runs 7 services a day between Ballina and the capital. In 2007 Bus Éireann launched a direct bus from Dublin Airport to Ballina. A Ballina to Enniscrone bus (which is run by several companies during the summer months) was the first chartered bus service in the country.

Ireland West Airport Knock (Knock Airport, NOC) is about 31 miles from Ballina. Bus Éireann now runs a shuttle service about five times a day from the airport to Charlestown, from where commuters can get a connecting bus to Ballina.